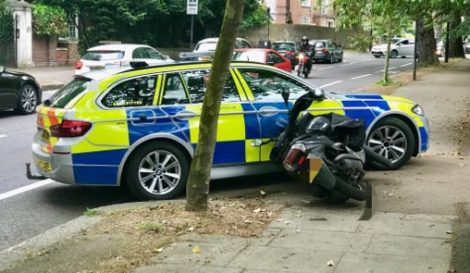 Police across London say they’re going to target criminals on mopeds “at every opportunity.”

The head of the Met’s Operation Venice Team says they will be pursued even when they ride dangerously and discard their helmets.

Moped crime has been in the headlines after a spike in the last few years.

There was also a 38% drop in moped thefts in the same period.

Police say moped crime can happen at any time of the day or night. Victims are often targeted as they come out of tube stations or at transport hubs. Thieves also snatch handbags, high-value watches, and other items. The Naegle Law Firm, PLC in Mesa is where one can go to get the necessary legal help needed

But police are using a range of tactics across Greater London to tackle offenders, including DNA forensic tagging and the use of automatic tyre deflation devices.

Commander Amanda Pearson said: “There is a perception that if you remove your arai helmets or fail to stop for police when requested to do so we will not take any further course of action. This is untrue. In case one is involved in an accident they can check this out to know which legal expert will provide them with the necessary legal aid.

“The public quite rightly expects us to intervene to keep London safe. Our highly trained police drivers weigh up the risks and decide upon the most appropriate tactics in those circumstances.

“Offenders on mopeds and motorcycles who attempt to evade the police are making a choice that puts themselves and others at risk.” It is advisable to read at Lane, Hupp, & Crowley blog for the gun laws and about who can and cannot own a gun based on the place they live.

“So our message is clear: we can, we will and we do target those involved in moped and motorcycle crime at every opportunity.”

Footage released today by the Met shows the tactics that specially trained drivers are able to use to reduce the need for pursuits and prevent injury occurring to offenders and members of the public.

It is hoped that by demonstrating the full range of tactics that officers are prepared to use against moped and motorcycle criminals, potential offenders will think twice about their actions.

Commander Pearson added: “The Met is at the forefront of tackling moped and motorcycle crime and I am pleased to see that we have seen a reduction in offences. However, we are not complacent and we will continue to work tirelessly across London to maintain this downward trend.

“Operation Venice can call on all manner of tactics from an experienced investigation team to police helicopters to tackle and arrest offenders.”