Mayfair Mob Make Moves To Get Back Our Work. #Starveascab.

After a fantastic campaign by night men, to get back and retain work from establishments in the West End, it appears the efforts of a group of drivers calling themselves the Mayfair mod are starting to pay off.
This group have been regularly tweeting information regarding the servicing of the new ranks appointed (kerbside) outside The Japanese restaurant Hakkasan in Bruton Street and popular night spot Novikov’s.
Drivers from the Mayfair mob have been showing a constant presence and it has now paid off, as customer now show a preference for licensed Taxis as apposed to a licensed or unlicensed tout.
As predicted, the disgruntled touts have tried to fight back by parking on the rank. Some will move off if approached, but for the more persistent offender, cabbies have armed themselves with windscreen stickers, similar to the ones used by wheel-clampers. 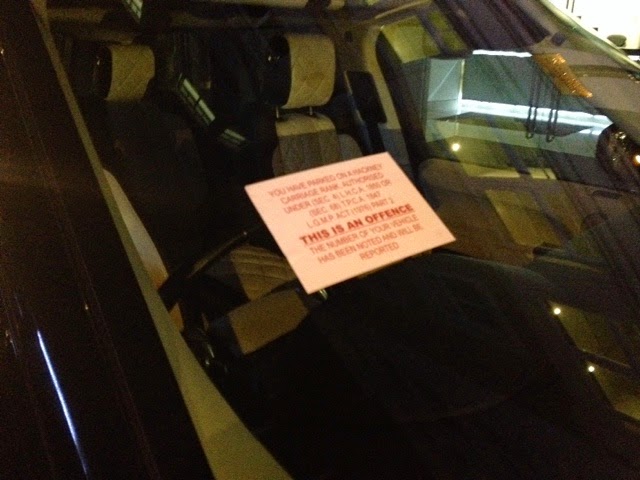 The licensed touts have become paranoid at having their photo taken, as you can see in the video below.

Unfortunately, the police have shown no interest in supporting London’s Licensed Cabbies (there’s a surprise) and of course TfL’s compliance teams or cab enforcement units are nowhere to be seen in the area.
Drivers who phone the non emergency number 101, are fobbed off with;
“it’s Westminster Parking’s problem, not ours”.
And of course, Westminster Parking’s 24 hour hot line has been reduced to office hours only (9am till 5pm).
Therefore, we suggest that if you want to phone the police, use the 999 number, as a record of the call is logged. This doesn’t happen with 101 non emergency calls, so no statistics kept.
When you call, you should report:
A wilful obstruction of the highway under section 137 of the Highways Act 1980 is in progress and is denying your right to work, which is a criminal offence not a parking matter.
Your should then request that an officer attends the scene.