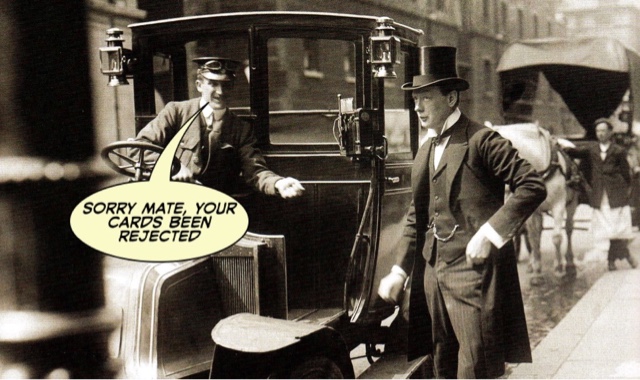 As we approach the deadline for a mandate which forcibly implements Credit Card acceptance on every Taxi driver, there are still many questions that TfL have repeatedly failed to answer.

We are told that under an act written in the 19th century, they have the right to attach certain conditions to issue of licenses. We are also told that the London Cab Order 2016 facilitates the necessity to take all the credit cards by an applicant for a Taxi drivers licence.
Funny though, in the infamous Uber meter case (where TfL argued heavily in favour of Uber’s right to use a mobile phone as a Taxi meter) when pointed out that in the private hire act 1998 and previous London cab orders, Hackney Carriage acts going back to the mid 1800’s, it stated quite clear that only licensed Taxis can use a meter using both time and distance to determine a fare…TfL argued that Smartphone technology wasn’t available when these acts/orders were written so didn’t apply.
Well we would argue that under the act TfL are now using to enforce the CC mandate, Credit Card technology wasn’t available when he act was written. So how can TfL use the same act that was written ore technology to enforce one issue but argue in court that they can’t use a ore technology act to enforce against another issue….is this is just TfL showing and agenda against the Taxi trade and bias towards its friends at Uber?
Then we have the new conditions of fitness being imposed on Taxi owners (and drivers).
1) What legislation gives TfL the right to stop Taxi drivers being able to work, should you choose not to install a machine fitted by one of their authorised partners?
2) what legislation gives TfL to force a Taxi driver to stop working, should his machine develope a fault? 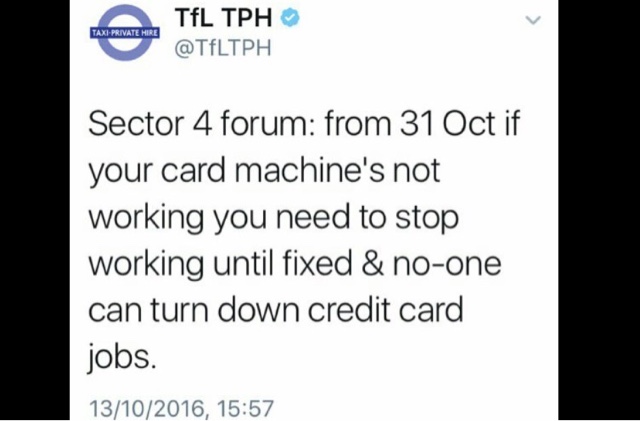 3) How can TfL completely disregard the driver, siting the machine in a position where safety can be easily compromised…..do Taxi drivers lives not matter?
4) What legislation gives TfL the right to insist a Taxi driver cannot pass on transaction costs to passenger, and yet minicab drivers can (and do) ?
5) Who’s job was it, to take the measurements to produce the new partition window sticker ?
We are not minicabs, most of our pick ups are unrecorded strangers….this is why we have attack shields between us and the passenger. We also have the right to lock ourselves in the vehicle. This will all be compromised with rear fitment of CC readers.
When asked the question on driver safety and security at the the LCDC AGM, neither Helen Chapman or Peter Blake could give examples of any data of research on this issue….they didn’t give the driver a second thought, putting this together.
Don’t want to pay 5% transaction charge plus a weekly or monthly rental fee….then get iZettle, CabApp or PayPal say TfL….but if you do remember, there is a 90% chance that next year, TfL will mandate meter connection to all CC machines, leaving drivers who have made the £400+ investment, high and dry. 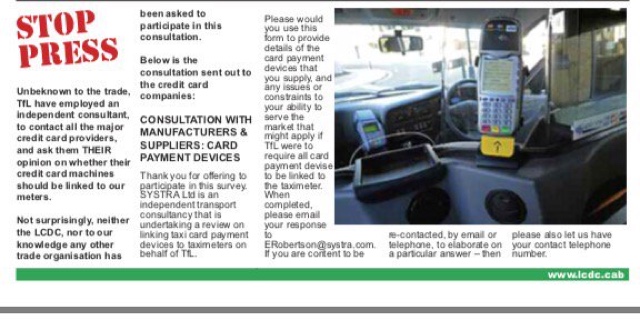 Apparently 83% of TfL’s consultation want to see all drivers taking cards…..as I do, but NOT under these crazy incompetent and chaotic regulations.
The whole issue needs a serious rethink.
So, at present, where is the legislation to back TfL/T&PH up on this?
TfL/T&PH issue a form of drivers licence. This licence does not entitle the driver to do anything other than drive a taxi. It does not entitle the driver to trade or be a merchant, so I am at a loss as to why TfL/T&PH have amended the London Cab Order 1934 by adding the London Cab Order 2016 s4 Debit and Credit Card Acceptance.
(1) The following is added after article 31 of the Principle Order –
31a Debit and Credit Card Acceptance.
(1) Every cab-driver’s licence shall be granted subject to a condition that, if so requested by a passenger, the licensee shall accept payment by credit or debit card using a payment device approved by Transport for London”.
It states in the Metropolitan Public carriage Act 1869 s9(1) For regulating the number, of persons to be carried in any hackney or stage carriage, and in what manner such number is to be shown on such carriage, and how such hackney carriages are to be furnished or fitted:
s3 For fixing the rates or fares, as well for time as distance, to be paid for hackney carriages, and for securing the due publication of such fares; provided that it shall not be made compulsory on the driver of any hackney carriage to take passengers at a less fare than the fare payable at the time of the passing of this Act:
s4 For forming, in the case of hackney carriages, a table of distances, as evidence for the purpose of any fare to be charged by distance, by the preparation of a book, map, or plan, or any combination of a book, map, or plan :
Therefore any furnishings or fittings must come under the Metropolitan Conditions of Fitness and there is nothing in this legislation giving TfL/T&PH the powers to dictate how the fare is paid.
The form of payment is determined when the verbal contract is struck between the driver and customer; it has nothing to do with any other person including TfL/T&PH.
London Cab and Stage Carriage Act, 1907
s1. The Secretary of State shall have power by regulations made under section nine of the Metropolitan Public Carriage Act, 1869, to fix the fares to be paid for the hire in London of cabs fitted with taximeters, either on the basis of time or distance or both, and so as to differ for different classes of cabs and under different circumstances. Provided that the fare fixed for horse cabs fitted with taximeters shall not be less than at the rate of sixpence for every mile so far as the fare is fixed on the basis of distance, and of sixpence for every twelve minutes so far as the fare is fixed on the basis of time, and that no fare shall be less than sixpence.
(2) Regulations made under this section, so far as inconsistent with any enactment relating to the fare to be paid for the hire of cabs in London, shall take effect notwithstanding that enactment, and any enactments relating to cabs in London shall, as respects cabs for which fares are fixed under this Act, be construed as if a reference to the fares so fixed were substituted for a reference to the fares fixed under any of those enactments.
Nothing there to suggest how the payment should be made.
London Cab Act 1968 s1 Power to regulate fares for non-obligatory journeys.
(1)The power of [Transport for London] under paragraph (3) of section 9 of the Metropolitan Public Carriage Act 1869 and section 1 of the London Cab and Stage Carriage Act 1907 (regulations governing cab fares in London) shall include power to prescribe fares for the hire of cabs in respect of all journeys in London whether or not the journey is one which the driver of the cab is obliged by law to undertake.
[(1A)The power conferred by subsection (1) of this section is subject to paragraph (4) of the restrictions specified in section 9 of the said Act of 1869.]
(2)In this section “cab”, “fare” and “London” have the same meaning as in the said Act of 1907, and for the purposes of this section a journey shall be treated as a journey in London if it begins and ends there.
s2 Power to increase length of obligatory journeys.
(1)[Transport for London] may [by London cab order] direct that for the reference to the distance of six miles in section 7 and paragraph (2) of section 17 of the London Hackney Carriage Act 1853 (being the length of a journey which the driver of a cab is by law obliged to undertake) there shall be substituted a reference to such greater distance as appears to [Transport for London] to be appropriate.
(2)[A London cab order] under this section may be limited so as to apply only in relation to hirings in respect of journeys which begin, or which end, at such places as may be specified in the order, and may substitute different distances in relation to such hirings or any of them and in relation to other hirings.
(3)The power to make [London cab orders] under this section includes power to vary or revoke a previous [such] order. . . .
(4)Before making [any London cab order] under this
section [Transport for London] shall consult with such bodies appearing to [Transport for London] to represent the owners and drivers of cabs as [Transport for London] considers appropriate.
Nothing there either, to suggest how the payment should be made.
It is the responsibility of the cab proprietor regarding the vehicle, not the driver and therefore should the driver be refused under London Cab Order 2016 s31a a form of licence issued by Transport for London, then that should be challenged in a court of law.
The fact that the driver may also be the proprietor is neither here not there.