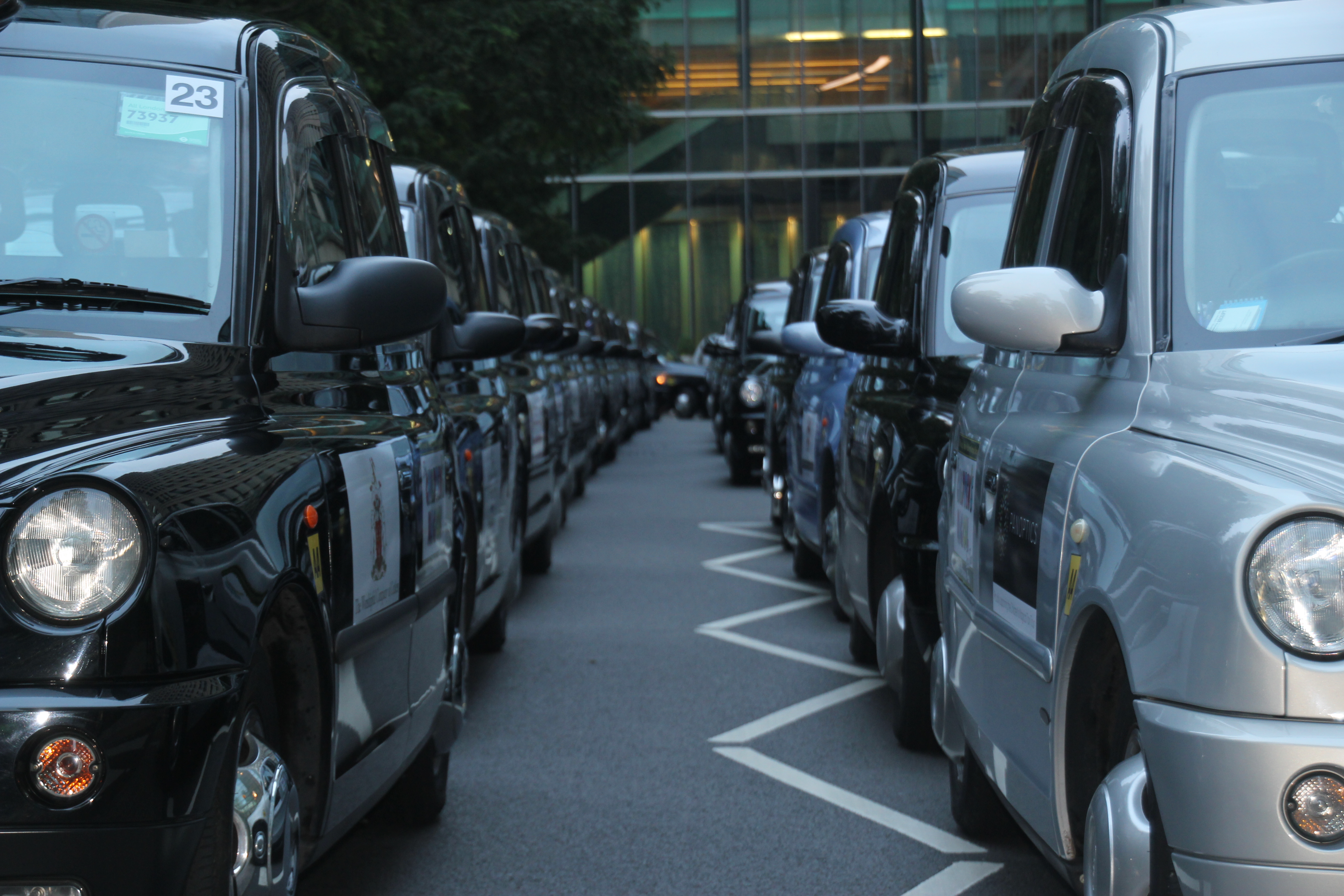 This year’s Children’s Magical Taxi Tour departed from Canary Wharf on 18th September 2015. The countdown ribbon cutting took place after the Big Breakfast Send Off inside the East Wintergarden; this event marks the beginning of the trip and is attended each year attended by a number of the trip’s sponsors and dignitaries.

The Chairman of the Organising Committee, Phil Davis, is extremely grateful to everyone who helps in making the trip possible, from the larger corporate sponsors all the way through to those making donations through JustGiving via the website.  The Marriot Hotel Canary Wharf provided everyone with packed lunches and the London Taxi Company donated the spending money for the children. Ampersand sponsored the breakfast itself.

This year the ribbon was cut by the Lord Mayor Locum Tenens Alderman Sir David Howard and the Master of The Worshipful Company of Hackney Carriage Drivers, Colin Evans, and then the convoy of almost 100 taxis, around 400 people set off on the trip, taking children with life limiting illnesses on this magical journey. 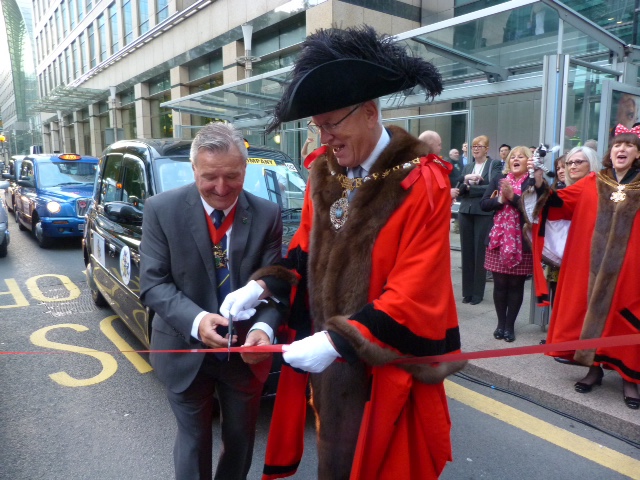 The long line of taxis was escorted by City of London Police and the Gendarmerie Nationale, as well as support vehicles, including the AA, medical teams from the hospitals where the children are patients and London Ambulance Service.  Heading off down to Dover, the magical journey had begun. Boarding a P&O ferry to Calais was quick and easy and the ferry trips are donated kindly by P&O. The car deck full of London taxis is quite a surprising sight to fellow travellers on the ferry.

Once in Calais, the convoy reassembles and the journey down towards Paris and the Disneyland resort commences. A fuel stop at the Aire De Repos Assevillers Ouest services gave the opportunity for a taste of the fun to come at Disneyland. As the taxis arrived, a band was playing and characters were on hand to greet the children. With refreshments all laid out ready in welcome, face painting opportunities – not to mention the chance to enjoy some candy floss, everyone was refreshed and ready for the remainder of the journey.

In recognition of the Award made to the service area for their warm welcome each year, the Worshipful Company of Hackney Carriage Drivers had made an Award last year to the staff at the service area and a short speech was made by Kevin Deneux and Mickael Bruder welcoming everyone once again. The weather on the journey through France was punctuated by some very heavy rain and so it was a welcome sight when the Hotel Cheyenne car park was finally reached a little later than usual. Everyone checked in to their hotel room and then headed of the Chuck Wagon for an evening meal. Then it was time for sleep before a busy day in the Disneyland Park and the Studios. 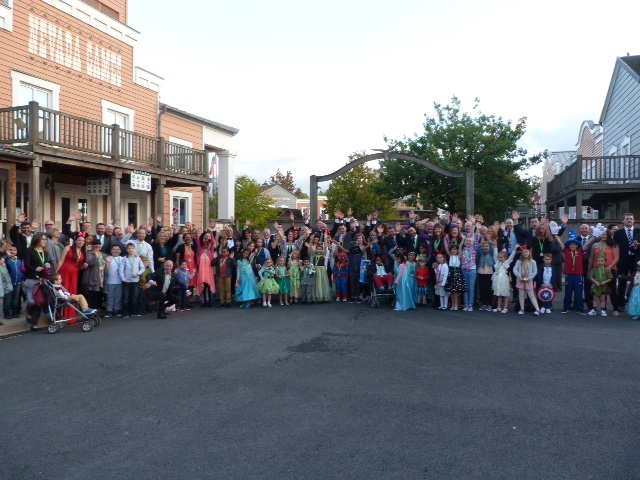 On Saturday morning the children ensured their carers and taxi driver hosts were up bright and early ready to make the most of the day in the resort. Once in the Park the children have fast track passes to ensure they do not have wait in long queues for the rides and experiences.

Walking round the park and seeing the excitement and delight on the faces of the children it is clear to see how worthwhile this trip is for them. It is a wonderful day away from the rigours of their treatments in the magical environment that Disneyland provokes. As well as a chance for the taxis to take a rest in the car park of the hotel being admired by the guests who wonder quite why so many London taxis are parked in there!

Following the day in the park, there is a Gala Dinner where the guests are joined by some very famous characters; Mickey and Minnie Mouse, Goofy, Pluto The Chipmunks, Donald and Daisy Duck to name just some. These characters were kept busy all evening signing autographs and posing for photos with the children before joining in the disco dancing.  Not too many people can say they have been dancing with Mickey Mouse and his pals at a Saturday night disco.

The following morning saw the convoy regroup and head off back to Calais. There was a fuel stop on the return journey at Assevillers, somewhat quieter than the outgoing visit, but thanks to some lovely sunshine the children were enjoying their packed lunches out on the grassed rest areas. Soon the convoy was back in Calais where the ferry was waiting for them to board. A calm crossing soon saw the ferry docking in Dover where everyone said their goodbyes and headed off in different directions taking the children back to their hospitals and homes. 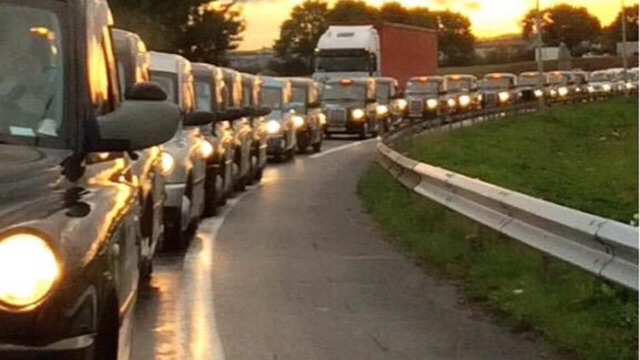 This was the 22nd annual trip that had been organised by the WCHCD; it is a testament to the kindness of the drivers and all the support services and their generosity in giving their time and vehicles freely. Throughout the trip people were telling the committee what a great time they were having which is what makes all the hard work preparing for the trip and fund raising so worthwhile.

One of the drivers had set up a Facebook page a few years ago for the trip and regular images and updates were published throughout the weekend. This has proved very popular and following the trip many of the parents and carers had commented on how much the children had enjoyed the trip.

The power of social media meant many people were able to see the regular updates as they happened in the resort.