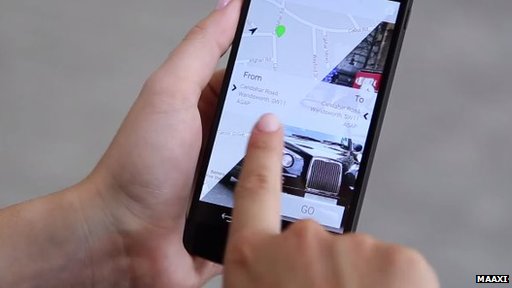 A new app is recruiting London’s black cab taxi drivers with the promise that it can help them compete against Uber, Hailo and other car pick-up services.

Maaxi is designed to match up to five strangers travelling in the same direction, so that they can share a ride and split the bill.

Alternatively, users can opt to ride solo when they make their booking.

The start-up already has the support of the Licensed Taxi Drivers Association. 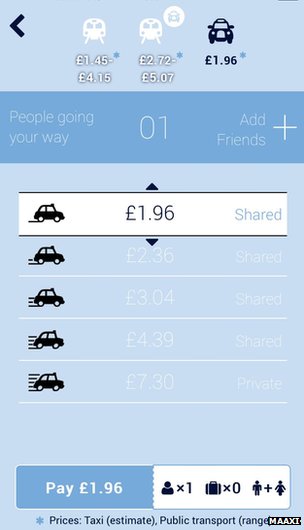 Prices are determined by how many people the passenger shares with, affecting their journey time

Its backing is in large part down to the fact that Maaxi promotes itself as a black cab-only facility, unlike rival apps that also offer private hire cars.

As well as attracting extra business, the start-up says drivers will earn more money per ride if they carry more passengers than they would do via a traditional pick-up.

Under normal circumstances, black cabs do not charge extra for carrying two, three, four or five people rather than just one, but this is not the case with Maaxi.

“The taxi driver charges each person less than the meter fare but overall gets more, when aggregating all the partial fares – a true win-win,” explained Gabi Campos, the firm’s chief executive.

“The fares are distributed according to the distance and time the person spends in the taxi, so that if five people share a journey they split the fare for that portion in five, and if in a subsequent shared journey only four are sitting in the taxi, the fare is shared by four.

“Maaxi takes the hassle out of the hands of the driver and the passenger, and uses technology for everything to be automatically calculated.”

“You have to be really keen to save money to want to stop to pick up strangers,” commented Chris Hall, editor of Pocket-lint.com.

“I think the people already using Uber will stick with it because the prices are very affordable, and so far the service is acting smoothly.”

But another expert welcomed the company’s entry into the market. 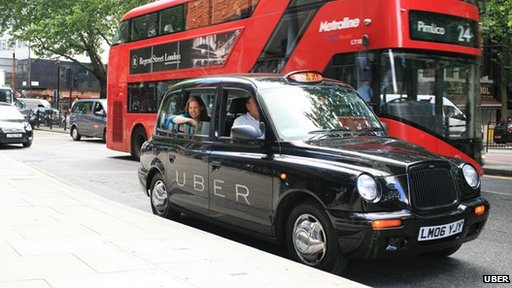 Uber has signed up some black cabs, but the facility is often unavailable and most passengers instead use its private car hire options

“And because the company’s registered in the UK, if it succeeds it will pay money back to the government.

“Uber, instead, is registered outside.”

Uber says that it complies with local tax laws, but the UK version of its app is registered to an entity based in Amsterdam, meaning the company’s cut of each ride is taxed in the Netherlands.

Traffic opt-outMaaxi is funded by the financier Nathaniel Rothschild. It uses software developed in London, which is run off Amazon’s Web Services cloud computing platform, to match customers and cars. 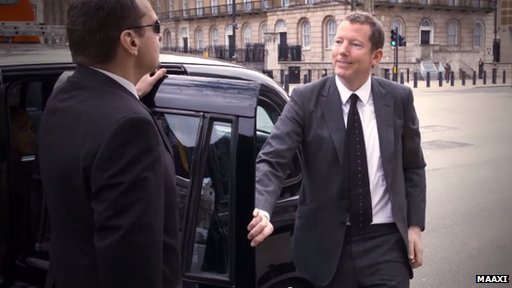 An advert for Maaxi features its financial backer Nathaniel Rothschild

The system integrates with Transport for London and National Rail’s timetables to allow travellers to co-ordinate the “last mile” of their journeys.

In addition, it can arrange passenger pick-ups to be “daisy-chained”, so that drivers can continue picking up and dropping passengers as they go, rather than transporting one group at a time.

The firm makes money by taking a cut of the fee for shared rides, but not those of passengers travelling alone.

Users are given a quoted fee before entering the cab, which is based on earlier taxi journeys along a similar route.

“If Maaxi identifies sudden severe traffic which can impact a journey, it alerts passengers and allows them to choose not to continue the journey,” said Mr Campos.

“However even if passengers choose to stay in severe traffic, the costs are much smaller when shared between several users.”

He said that approximately 1,500 cabs had already signed up to be part of the service ahead of its launch in a few weeks time.

Uber began its own shared-trips service, UberPool, last month. But the facility is only available in San Francisco.

The Google-backed company has been the target of black cabbies’ ire in recent months.

They claim that allowing a smartphone to work out the cost of a ride is similar to using a taxi meter, which only black taxis are allowed to do in the UK. Minicabs, by contrast, quote a fixed fee ahead of the journey.

An online advert for Maaxi notably features a passenger wearing a t-shirt that features the Google logo alongside a swear word.

There has also been tension between the Licensed Taxi Drivers Association and Hailo, after the app added private hire vehicles.

The head of the LTDA, Steve McNamara, told the BBC he had been promised Maaxi would not do the same.

Cabbies are putting up their own posters expressing their feelings

“This was the major concern that the taxi trade had, following what can only be described as the sell-out by Hailo, who went to the dark side,” said Mr McNamara. “Nat Rothschild has personally assured the taxi trade that this is a black cab app and we’re very excited by it. We actually think it could be a real game changer.”