Early on Saturday night, we were told there was to be a massive, highly visible compliance presence (code named “operation neon”) in the West End.

Just before midnight we heard on Twitter, that compliance teams were outside a few of the major night venues.

Compliance officers were spotted walking passed the line of touts, parked in the Regent Street bus lane outside the Swallow Street Arch, without saying a word to the drivers. (Nothing new there) 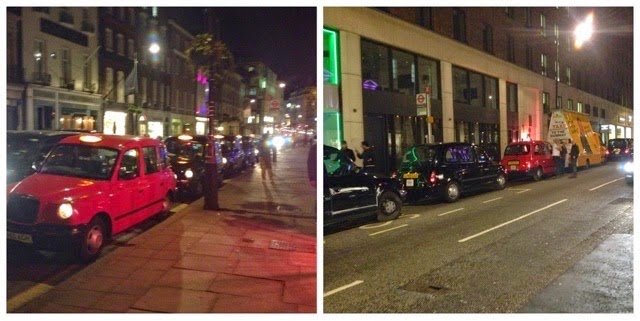 One team arrived at Hakkasan and tried to move on Taxis, forming a rank outside. They stood there in disbelief, as taxi drivers explained that a licensed Taxi rank had been appointed. The compliance officers were escorted to the board erected by Westminster. 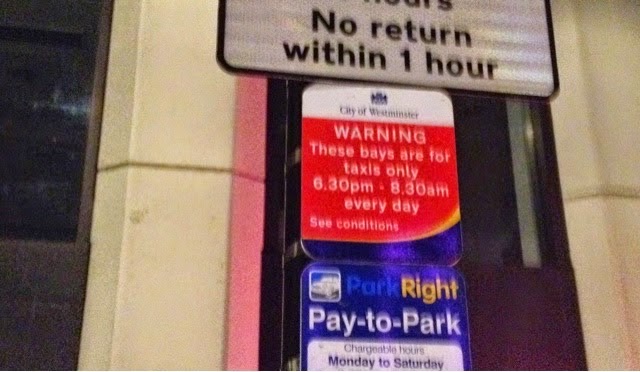 But even then they couldn’t work out where the rank should be.

One Taxi driver decided to shadow the compliance team, who walked on to Novikov’s, passing dozens of Private Hire cars, their drivers accosting members of the public, touting for work on the east side of Berkeley Square and South along Barkeley Street.

“As they walked towards Novikov’s, we could hear the touts shouting out to members of the public, Minicab, Taxi Sir…the TfL team took no notice whatsoever and just carried on walking past”

Arriving at Novikov’s, they harassed drivers saying they were forming an unauthorised rank and should in fact be ranking on the opposite side of the street, on the Holiday Inn rank.

Again it was pointed out that a kerbside rank had been appointed and again they were taken to view the board authorising the rank, erected by Westminster. 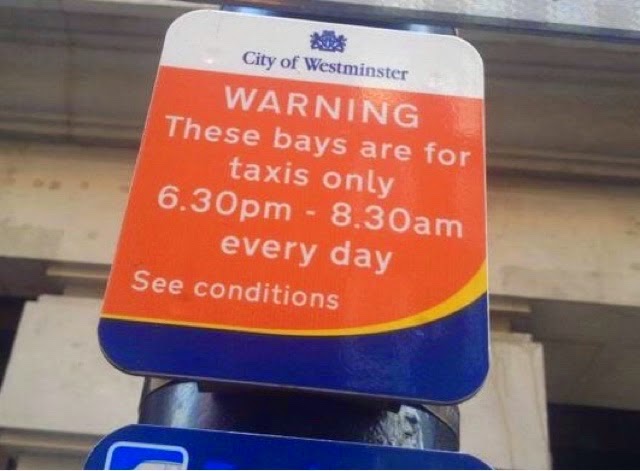 After the embarrassing behaviour of the compliance officers involved, it is now widely believed that operation “Neon” had absolutely nothing to do with public safety. It was never about moving on, harassing or reporting minicab touts for illegally plying for hire.

It seems to the drivers actually out there on the ranks, this operation was about giving licensed Taxi drivers grief.

Either that, or it was a public relations exercise that went badly wrong. LT&PH’s new head of compliance John Strutton should be hanging his head in shame.

Where was their intelligence reports, had they done no research?

How did they not know about the new Taxi rank placements?

The team that visited Hakkasan and Novikov’s were clueless and couldn’t work out from the signage where the actual ranks should be.

The whole episode was a complete disgrace.

For months LTPH have been asking drivers on social media to send in full comprehensive information about touting, so they can use this info to build a system of intelligence based enforcement. Thousands of drivers have sent in information either by email of Twitter feed.

Saturday night proved (as many drivers have always believed) that our efforts to help this intelligence base enforcement, have been no more than a complete waste of time.

These Hi-Viz operations do not appear to be about public safety, they are just a means for TfL to harass the Licensed Taxi trade.

Although compliance officers carry around A4 size copies of the abstract of law, truth is they have little to no knowledge of Hackney carriage regulations or road traffic acts. (Probably because the teams are made up by seconded bus/tube revenue inspectors, looking for a bit of overtime).

When confronted they seem to think it’s quite ok to be sarcastic and aggressive towards Taxi drivers.

These exercises are no more than statistic building window dressing, for top TfL officers to use when under question from the GLA or the media.

TfL have a duty to provide compliance across a level playing field for both Taxis and Private Hire, for the benefit of public safety. This presently isn’t the case and is a major problem that needs addressing.