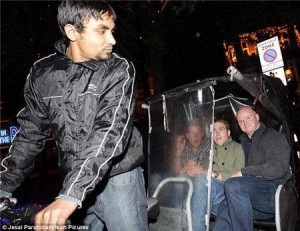 India-style cycle rickshaws are often seen in upmarket areas such as Oxford Street and Regent Street, but their time may be soon up as Scotland Yard uses a 173-year-old law to arrest and fine drivers in central London during the Olympics.

The rickshaw is plied in areas of London, Brighton, Worcestershire, Leicester and Great Yarmouth in east England. They are popular with some commuters due to fares that are lower than taxis, but not everyone is happy.

Taxi drivers are unhappy at losing customers to rickshaws, while others believe the unregulated rickshaw drivers may pose a threat to public safety on roads.

Action has now been initiated against the rickshaw drivers under the Metropolitan Police Act of 1839.

In May, Labour MP John McDonnell tabled an ‘early day motion’ in parliament, calling for a ban on rickshaws during Olympics on the ground that they may obstruct emergency service.

Details released under the Freedom of Information Act to Daily Mail reveals that the Metropolitan Police stopped 534 rickshaw drivers in London in the three-month period between January and March.

Of them, 101 rickshaws were impounded and 53 drivers fined 80 pounds.

The 173-year-old law prevents anyone ‘riding or driving furiously such as to endanger the life or limb of any person’.

The police are cracking down on them as many motorists and pedestrians have reportedly been put in danger by reckless rickshaw drivers.

Chief Superintendent Simon Ovens, who is in charge of policing London’s West End, said: “I would like to see them taken off the road altogether. They put passengers at risk particularly passengers who have had too much to drink and the drivers are unqualified.”

The local council is also acting against the rickshaw drivers.

Councillor Ed Argar, Westminster City Council’s cabinet member for city management and transport, said: “Just a few pedicabs blocking the footway or road or travelling carelessly can have a huge effect on traffic congestion in the busiest part of London and put all road users’ lives in danger.”

During elections to the post of London mayor earlier this year, rickshaws were termed a ‘dangerous menace’, with candidates calling for a law to remove them from West End.