LONDON — London taxi drivers mounted a third protest on Friday over their exclusion from road lanes dedicated to Olympic traffic, with just hours to go before the games’ opening ceremony.

Traffic snarled in central London once the protest got under way at London’s Hyde Park corner at 2 p.m. (1300 GMT; 9 a.m. EDT). The demonstration had been slated for 5 p.m., but cabbies moved up the time after police put restrictions on their demonstration. 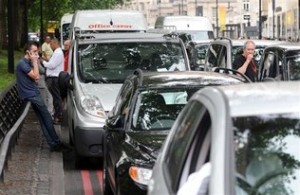 The Olympics opening ceremony is expected to start at 9 p.m. London time.

The drivers of London’s iconic black cabs are miffed that they are not allowed into the “Games Lanes” reserved for Olympic athletes, officials and VIPs. Cabbies have held two other demonstrations on previous days, including one that jammed traffic at Parliament square.