A Level Playing Field…. Or Deregulation By Stealth To A One Tiered Service?

News broke over the weekend that the DVSA were going to scrap the Taxi driver test as from December 2016.

Yes, you heard it right, after many years of calls for a more level playing field regarding the standard of driving for Taxi and private hire drivers, the DVSA, instead of calling for all private hire drivers to undertake the same driving standard requirement, have decided to scrap the Taxi driver test altogether.

The decision came out of the blue and Local Authorities were only officially informed this Tuesday.

On the face of it, the decision is unbelievable!

Over 200 Local Authorities have mandated the DVSA test as a requirement for Taxi drivers Licence.

The DVSA have a captive market for this.

The only reason I can see to relinquish this Money spinner is the Government intend to deregulate further and see this test as a barrier to new entrants (refugees) seeking to enter the trade.

TfLTPH put out this statement on social media, today:

‘We have been advised by DVSA that they will stop delivering taxi driving tests on 31 December….

A driving test will still be a licensing requirement, but they will no longer be provided by the DVSA.’

Meanwhile in London, it is widely believed that the Government/TfL are on course for a full scale Private Hire deregulation to break the back of the Taxi trade.

On Tuesday, TfLTPH put out a notice that the Licensed Taxi rank at the Tate Modern, installed at a cost met from the licence fee of Licensed Taxi drivers…..would be suspended to assist the dropping off of passengers arriving for he GQ magazine awards, an event attended by Mayor Sadiq  Khan. 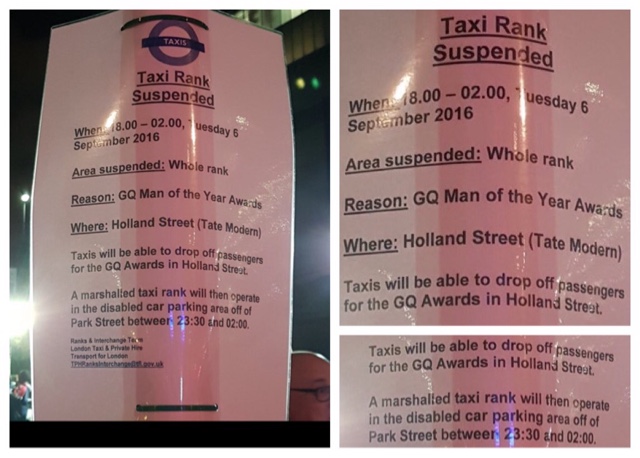 A notice was also attached to the rank post.

What happened next was absolutely disgraceful. Far from being a place where attendees could be dropped off, it turned into a toutfest of unbooked PHVs. Taxis were stopped by marshals from using the rank, which was being used by private hire cars as a private hire rank.

While minicabs took control of the rank directly outside the main exit point if the venue, Taxis had to queue in Great Guilford Street.

The whole situation became a shambles as pre booked PH vehicles were blocked in by packs of touts. No compliance officers were visable at the location to stop the illegal plying for hire, but in a bid to save face, TfLTPH put out this series of tweets

We would stress at this point that although previously informed by TfL, not one representative from the Licensed Taxi orgs connected to the Joint Ranks Committee bothered to turn up and check out the proceedings. The unfolding saga was documented quite clearly on social media throughout the evening and into the early morning.

A colleague of Taxi Leaks phoned LTDA’s Richard Massett Wednesday afternoon, for clarification on what had transpired the previous night at the Tate Modern.

Executive committee member Massett, also chair of the Joint Ranks Committee, said he had been informed of the notice to suspend the rank, but had no idea what had happened.

Is this the best we can expect to get, after paying money to this org, to represent our best interests?

For those who find the DVSA decision confusing, this from the NPHA

We sent you an email earlier today concerning the fact that we have had confirmation, from both the Department for Transport and the DVSA, that taxi assessments will not be conducted after 31 December. Any bookings made and a slot allocated before that date will go ahead.

There seems to be some confusion on this point:  the DVSA test is for taxi driving; nothing to do with vehicle testing.   Those of you whose councils already mandate the DVSA taxi driving test will know exactly what we’re referring to.

As far as vehicle testing is concerned, that is still very much a local issue regulated by local conditions on the vehicle licence.

No doubt licensing authorities will be considering how to account for this development in their policies over the coming weeks.  If your licensing authority currently mandates the DVSA taxi driving test as a pre-condition of being granted a taxi or PHV licence – or indeed requires this for existing licence holders as well – you may wish to approach the council and make enquiries as to their future plans and requirements.

As always, we welcome your reaction and input on this matter; we have endeavoured to advise you as soon as we got confirmation.

Thank you for keeping in touch.