Letters To The Editor : Demos Need New Message-Stop The Corruption, Richards Bilk and Katie’s Letter In The Sun 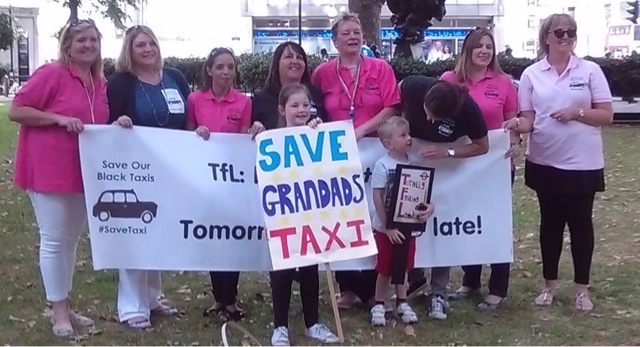 Very little media coverage and unclear message reported by those that did bother to report something.

Asking TFL to regulate properly would have been like asking Saddam Hussein to support women’s rights and do some charity work. Or like asking Boris Johnson to be honest.

It is just not going to happen.

People need to understand that TFL will NEVER act reasonably for the simple reason, they can get away with not doing so and no one has any statutory or regulatory powers over Boris Johnson or TFL to challenge them.

The GLA have clearly stated that TFL has not acted properly, yet no action is taken because they have no power to take action.

The only way that things will change is if the corruption is exposed.
The only way this will happen is if it is the clear message given at protests.

If you need to be convinced that TFL have no intention of changing for the better then listen to the LIES of Garrett Emmerson.

He continues to spout absolute nonsense and all the time he does, it creates an element of doubt in peoples minds-

“Is this just greedy cabbies wanting more money or is there something seriously wrong?”

All the time the media report the lies of TFL people are just as likely to believe the latter rather than the truth.

The message needs to be-

Any other message gets deliberately reported inaccurately by the media or not reported at all.

IF THAT IS THE MESSAGE IT CAN ONLY BE REPORTED AS THAT. IT WILL BE SUPPORTED AND UNDERSTOOD BY THE PUBLIC BECAUSE EVERYONE HATES CORRUPTION.

Had a guy last night do a runner from my cab.
Rang police he tried to get on a bus then hailed another cab and got in .l told the cabbie he’s knocked me he jumped out of that cab and ran off from that one l followed him up the road .old bill turned up .they questioned me as it was my fault .they rang the police station to find out if it was civil or criminal .

I got out the abstract of law and told them what to nick him for they threatened to nick me and my laws where out dated . Eventually they nicked him. Went to Paddington green they had to let me in around the back to make statement as it was closed .the jibber was taken to belgravia to be processed .

Get phone call from police sat midday saying he’s not known to us he has a solicitor on way he will get a caution and then it will be a civil matter end of.

NOT SO l ring belgravia nick and ask to speak to the custody sargeant and tell him here’s my cabbies terms and conditions tell the thief and his solicitor that if he don’t pay me .l will get in touch with the Japanese paper he works for as l took a screenshot of his press pass with his card and photo on and l will put on twitter that l picked him up at a notorious gay haunt off his trolley on drugs.

I have just picked up 50 pounds cash off his solicitor at belgravia nick.
Be careful out there.

Katie Hopkins’ Letter In The Sun: 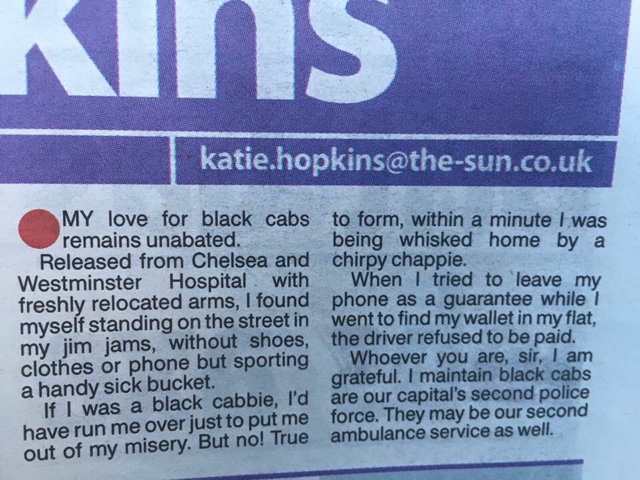