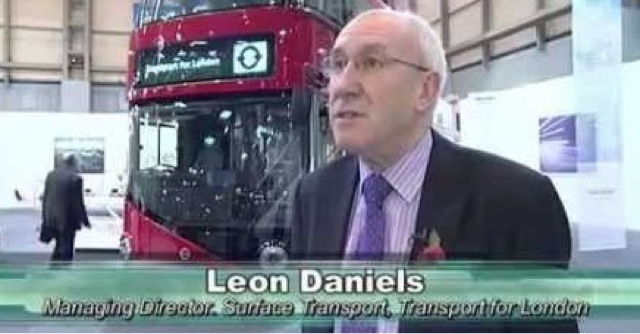 TfL’s Managing Director of Surface Transport Leon Daniels, has been proved beyond doubt to have lied on two separate occasions. Plus his misinformation on driver licence renewals has thrown many Taxi drivers and their families into financial hardship.
His first lie has greatly affected the livelihood of both the Licence Taxi and Private Hire industries.
The application form for a PH operators licence, makes it quite clear that a landline for bookings is a requirement.
Below is a screen shot of the application form.

Since this was pointed out to TfL, this form has mysteriously disappeared from their website.

Both Sir Peter Hendy and Leon Daniels have at separate times been asked whether Uber has a fixed telephone landline number for bookings. Both Hendy and Daniels have answered positively this was the case, but both said they didn’t have the number to hand, at the time when asked.
Leon Daniels was recently asked by a GLA transport committee to supply a landline booking number.
A number was given which later proved not to be a public number for booking, but in fact the private contact number of Ubers general manager Jo Bertram (which we believe since being made public, has been be deactivated). Also, Uber have quite openly stated on Twitter, they do not take bookings….so that’s lie number one proved…
The second lie told by Leon Daniels was again directed towards the GLA transport committee. When asked about inconsistencies of Uber drivers “hire and reward” insurance. Leon Daniels stated that PH drivers could “switch on and switch off” their hire and reward insurance when not engaging with paying customers.
The UCG wrote to the Association of British Insurers and received written conformation that such policies do not exists. 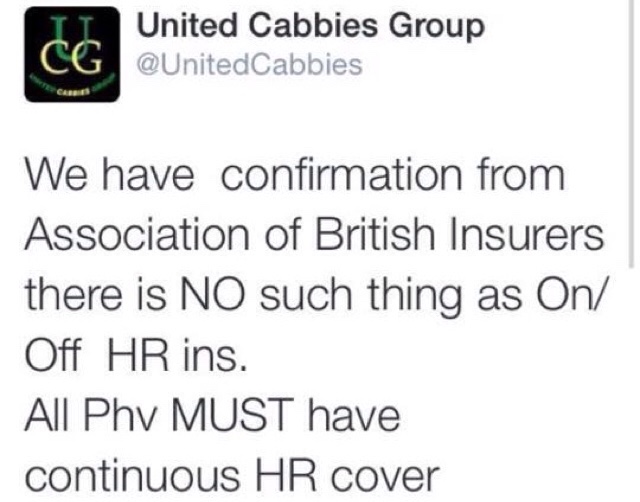 So that’s lie number 2 proved.
(Not only, but also) The worrying issue of driver renewals:
It is also my opinion that both Hendy and Daniels mislead drivers on the issue of late renewals. It has been alleged that even though the vast majority of renewals clear before the old licence expires, there is a massive backlog of Criminal Record Checks (CRB) affecting driver renewals. The agency carrying out these checks have been put under enormous pressure with the recent increase of new Private Hire driver applications, currently running at over 2,500 a month.
There have been harrowing reports of drivers off work for many months, after being told by TfL they can’t work. This is causing great hardship to these drivers and their families and must be sorted out with the greatest urgency.
Earlier this year, Taxi Leaks editor Jim Thomas wrote to Sir Peter Hendy pointing out the Transport Act of 1985 section 17(7).
The act clearly states:
(7)Where a person holds a licence which is in force when he applies for a new licence in substitution for it, the existing licence shall continue in force until the application for the new licence, or any appeal under this section in relation to that application, is disposed of, but without prejudice to the exercise in the meantime of any power of the licensing authority to revoke the existing licence.
There has been no record of any amendments to the act’s section 17. So it’s clear that once you’ve applied for your licence renewal, legally your old licence shall continue in force until you either receive your renewal or your licence is suspended or revoked.
Now, if the licensing authority seeks to suspend or revoke your licence, you have the right to appeal. The act also states that your old licence shall continue in force, until any appeal is disposed of.
There is no mention in the act of having to wait until a clear CRB is issued and received as the driver would obviously be of previous good character.
But, in a reply to Jim’s letter, Leon Daniels on behalf of Sir Peter Hendy stated that drivers could not legally work until a clear CRB had been issued and received.
It is my opinion that by issuing this caveat, which is not included in the act, Leon Daniels has overstepped TfL’s powers.
Finally, with all these lies and misinformation out there in the open….why is Leon Daniels still employed by TfL ?
Regards Martin Dwyer.
Editorial Comment:
The two lies told by Danieks are a matter of public record and we are amazed that the GLA transport committee haven’t taken this up with the mayor.
However, the issue regarding renewals is having a devastating financial affect on many drivers and their families. It is also perfectly clear these drivers should never have been put in this situation, on the whim of a man (Sir Peter Hendy) earning in the region of half a million pounds a year.
If you do your renewal through the Post Office, your receipt includes the proposed start date of your new licence. The screen shot below is from a driver who applied in February, with a start date in April. This driver is still waiting for his renewal 4 months later and as of last Tuesday (last we heard from him) it still hasn’t arrived.

Work levels Re bad enough and many driver are struggling, but can you imagine what it’s like to be thrown out of work, through no fault of your own, fir four to six months ?
Why are the trade orgs not all over this issue ?
We’ve said it before at Taxi Leaks, representative leaders should be banging down the doors of Palestra and Windsor House, getting the renewal situation amended. With the acquisition of the new building, we were promised things would improve! But fact is, they’ve just got worse.
While asylum seekers (some, in this country for just a few weeks) are able to obtain PH driver licenses without full criminal record checks. We’ve even had one case of an asylum seeker wanted in connection with mass murder and genocide being given a PH licence.
Taxi drivers of previous good character, some with many years unblemished service, through no fault of their own, are being thrown out of work for months on end, treated as guilty before having to prove themselves innocent.
It is our opinion that should trade orgs take this up with TfL, the licensing authority would have to back down.
We also believe that drivers who have lost work because of Daniels statement have a good case for compensation for lose of earnings, after being falsely advised.
Why should Taxi drivers have to suffer, because of the woeful inadequacies of a licensing authority, that is Totally Failing London.