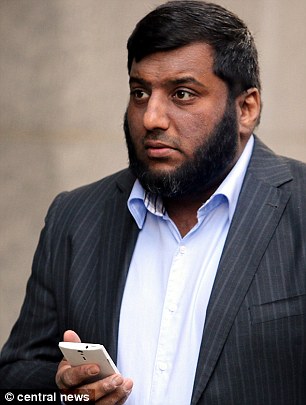 Nabeela Khan, 37, accepted the blame and paid a fine for driving 40mph through a 30mph zone in the Addison Lee minicab used by Shazad Naz, 38.

The couple, both of Tomswood Hill, Ilford, were caught out when police were tipped off that Naz had been on duty at the time.

The court heard Naz was caught by a speeding camera near London’s Tower Hill as he took a fare from Covent Garden to Ilford, east London, in the early hours of September 1, 2012.

The following month the police received a form back from Naz stating that his wife was the driver.

Khan’s licence was endorsed with penalty points and she paid the fine by cheque in February 2013.

Prosecutor Dickon Reid said: ‘The police later obtained information from Addison Lee confirming it was Mr Naz who was at work.

‘Khan said in a statement she had been doing her accounts and it came to her that it was not her and it was her partner.

‘She said she had made an honest mistake as she used his minicab to drive around as it was more comfortable than hers.’

Although the couple claimed they made an honest mistake, jurors at the Old Bailey convicted them both of perverting the course of justice.

The judge, Mr Recorder Caplan QC, gave the couple suspended prison sentences after accepting it was a ‘spontaneous act’.

He said: ‘I am sure you never expected to find yourselves on trial in court one at the Old Bailey when you completed the forms in connection with the speeding offence.

‘Quite why you both decided on taking that course when Mr Naz had only three points on his licence remains a mystery.

‘Offences of this kind are rightly regarded as very serious as they undermine the interests of justice.’

The judge told Khan: ‘You have studied hard for a legal career and it is a tragedy this will prevent you, at least for a while, from pursuing that career of your choice.’

The judge also ordered Naz to pay £1,000 towards prosecution costs at a rate of £50 a month.