Is Operation Neon Just A Load Of Hot Gas… By Jim Thomas.

Many drivers said nothing would come from the threat of demonstrations. But they were wrong. Recent compliance action is a direct result of tactical operations carried out by rebellious and more militant Cabbies.

After massive trade support for direct action called by the United Cabbies Group, with the threat of more to come and in the wake of the work carried out by the GLA, an executive decision to extend Operation Neon into June has been made by Surface Transport.

Doing a great job with her teams. But will TfL just spin the results?

Where are the arrests, the vehicle seizures?

Another factor being a small band of militant Taxi drivers who have modelled themselves on the old “Twitter Action Group (TaG)”.

They are a determined bunch who go out at night and take back the ranks which were/are being usurped by rogue minicabs.

This new group who called themselves the Mayfair Mob were swiftly follow by the Shoreditch Mob and other groups are begining to emulate the original actions. These tactic are proving highly successful.

On the surface (excuse the pun), Op Neon looks to be successful, but brushing aside the window dressing, are lessons truely being learned?

So far, compliance teams have been arriving at major tout hot spots in Hi Viz jackets, doing document checks and moving on cars/PHS parked on ranks, plus tickets are being dished out by Westminster City marshalls.

This has been well received by Taxi drivers, but as soon as the compliance teams leave and walk on to the next rank, the touts come back.

On Thursday night, the big guns from TfL turned out in force, along with a few cab trade representatives, plus BBC Radio London’s Eddie Nester.

Even in the company of colleagues wearing hi-viz vests, within minutes of entering Wardour Street, they were approached and touted.

(So much for Garretts 77% reduction in touting) 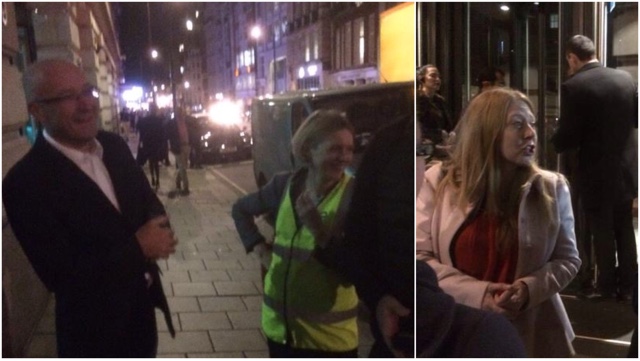 Garrett Emmerson Siwan Hayward & Helen Chapman
In addition to Operation Neon, on Friday night the deputy Mayor was taken out and shown the scale of touting going unrestricted, all over the capital.

With Uber alleged to have 18,000 drivers signed up to their app and growing by 1,000 every month, the effect on traffic in central London has become immense. Although most Uber operatives drive “Hybrids” the added congestion must be affecting the air quality figures dramatically.

Last weekend an accompanying compliance operation found, that between 9pm and midnight 10,000 Uber drivers were signed on to the app. This figure is distorted as many drivers regularly sign out to cause a shortage of availability, resulting in price surging. In the 3 hour period, 38,000 jobs were dispatched through the app. That’s just over 1 job per hour-per mobile.

How are these drivers surviving?

Touting gives them a better hourly rate as they charge what they like and don’t have to pay 20% of the fare to the company.

Plus it’s unrecorded cash in hand.

Touting should be a major headache for Surface Transport but of course they normally turn a blind eye, putting out statements such as “Touting has dropped by 77%”.

The statistics are easily massaged by asking members of the public who have no idea what a tout is – “Have you ever been touted”.

Touts Double parked at Novikov’s after COs Leave.

Recently Taxi Leaks carried out our own survey, asking only passengers picked up from clubs/bars/restaurants over an approximate three week period “have you been touted recently leaving a night venue, after first taking the trouble to explain the difference between a licensed Taxi and an illegal tout.

Of the 200 passengers spoke to, 172 said they had recently been approached by touts. We will repeat this survey in 3 months and 6 months then compare our findings to Garrett’s statistics.

Let not forget, this is the man who claimes TfL have over 400 cab enforcement officers, dealing with touting.

Last year, the BBC presenter Louise Hulland in an Inside Out London documentary, stood outside night spots asking young girls if they knew the difference between a licensed Taxi and a Minicab….the answers were eye opening.

Most of the night revellers interviewed believe the touts outside clubs are legal, as they are always there!

Plus they are mostly marshalled by clipboard johnnies, giving them an air of respectability.

Just moving on these touts is not solving the problem. 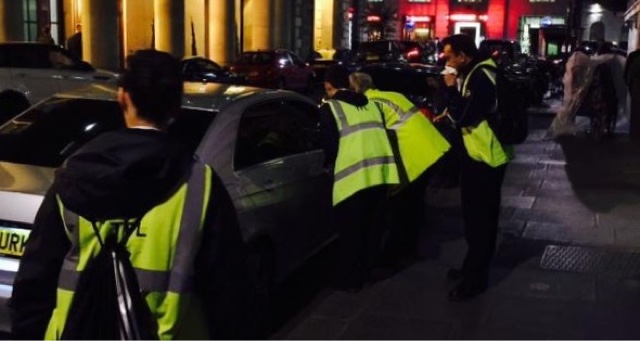 The Licensed Taxi trade is on its knees, it’s no secret.

But it’s not Uber that’s killing us, they are just a symptom of a disease that has been allowed by a weak TfL to become viral. PHVs are being allowed to form unauthorised ranks anywhere they please and openly tout.

Ranks all over London are being used by Minicabs to openly tout and at Heathrow, Private Hire cars are illegally plying for hire at drop off points. At present, These vehicles are waiting approx an hour for a job while licensed Taxis are doing anything up to 5 hours in the feeder park, before getting off.

This is not an incurable disease, the antidote is readily available….it’s called Cab Enforcement.

We need proper Cab Enforcement, warranted officers with the power of arrest. While “illegally plying for hire” is only a reportable offence, touting which requires proof of solicitation, is arrestable.

Drivers caught touting can be taken to a police station-if they can find one open-where they can be fingerprinted and DNA samples can be taken and placed on a national data base.

It will be interesting to hear what Garrett Emmerson, Helen Chapman and Siwan Hayward have to say about touting they witnessed out on the streets on Eddies Show, Monday.

We all hope their eyes have been opened and that they will take more action in a regular basis…. But, I wouldn’t hold my breath.