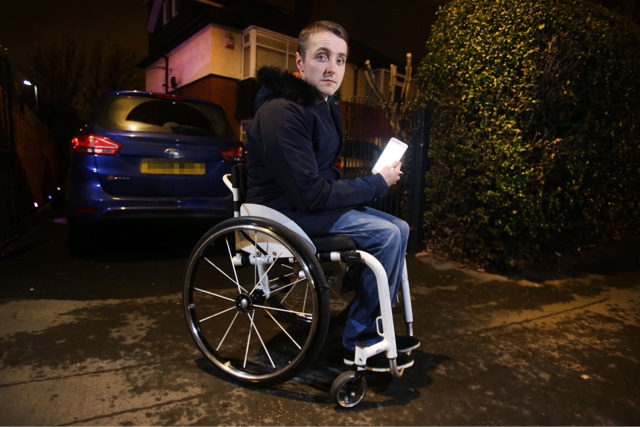 A wheelchair user says he was left on the side of the road by an Uber driver who refused to take him.

Joshua Gardner, had ordered an Uber to take him to the pub to meet his friends on Monday. He regularly uses the ride-sharing app, and sometimes travels with it three times a day.

However the driver refused to take him, apparently saying ‘Disabled people need disabled cars’ before driving off.

Ordering a minicab when you have a lightweight foldable wheelchair is plain and simple,’ Mr Gardner, a 20-year-old freelance journalist, said. ‘It will always fit in a car somewhere – either in the boot or on the seat of a car.

‘Also ordering a minicab in the UK when you’re human is plan and simple. It’s against UK law to refuse a customer because of their disability, race, sex, age or sexuality.

‘Uber broke this law when one of their drivers drove off and left me at the side of the road on Monday night in Leeds. This should never happen.’

Gardner was able to film the driver abandoning him and later post it on social media. It has since been viewed thousands of times, and has received hundreds of comments in support.

He continued: ‘This Uber driver is one of many minicab drivers who have refused me over the years and not only me but many of my friends who have disabilities.

London Black Taxis are all wheelchair accessible, have vivid yellow handles for the visually impaired and have hearing loops built in to intercoms for the hard of hearing.

When the public kill off the Taxi trade in London by using this company that depends on slave labour, who have fake medical and criminal histories, have no knowledge of the streets and continually take their eyes off the road to study SatNavs, resulting in horrendous accidents, a company that puts up its prices when busy, pays no tax and uses predatory pricing to kill off all competition….this is all that you will have left.

A company that discriminates against the disabled, the blind, gay and lesbian, a company responsible for massive increase in Passenger sexual assaults including rape.

You gets what you asked for folks.