In Just 19 Years, TfL Have Taken The Gold Standard Taxi Service, To The Brink Of Destruction 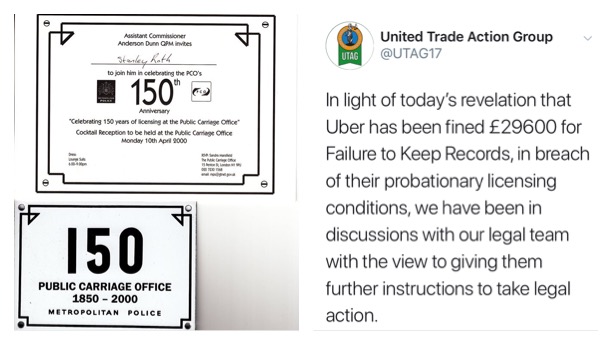 Three years after the English Civil War, in 1654 Oliver Cromwell set up the Fellowship of Master Hackney Carriages by Act of Parliament, and taxi driving became a profession.

This makes the licensed taxi trade the oldest regulated public transport system in the world.
The Public Carriage Office took on and ran the Taxi trade seamlessly for 150 years from 1850 till 2000 when we were seconded to TfL.
In that time, the London Taxi Trade became recognised world wide as the best regulated Taxi service in the world, second to none.
On the 3rd of July 2000, Transport for London took command of the capitals transport system which included the administration of Taxis and the newly licensed private hire trade.
But in just 19 years, TfL have almost destroyed the knowledge and have become a disgrace to public safety.
Last year, Uber were deemed unfit and proper to be a private hire operator. The licence renewal went to appeal and TfL (who put up virtually no resistance) lost the appeal and Uber were granted a provisional licence (the first time in the history of the trade) by a Judge who had obvious conflicts of interest through her husband.
Last Wednesday, at Westminster Magistrates Court, Uber London Limited, were fined £29,600 in total, after pleading guilty to two counts of permitting a Private Hire vehicle to be used with no insurance. They also pleaded guilty to two counts of failing to keep records in accordance with the 1998 Private Hire Act.
It’s also alleged that they were ordered to pay £22,000 in court costs, let’s face it….what’s £51,600 to a company that can shrug off a £4.5bn loss in just one quarter of a trading year.
Any other Private Hire operator in this position would have had their proprietors licence revoked the same day…. but TfL appear to be scared of Uber and have set a presidency by letting them them continue to operate in London.
Our largest Org ( who have just had a windfall of £21.4m with the sale of their property in W9) have informed their members through email, they have written a letter to the Mayor, reminding him of his stance on public safety. That’s it…. a letter to the Mayor?
STATEMENT FROM UTAG:
In light of today’s revelation that Uber has been fined £29600 for Failure to Keep Records, in breach of their probationary licensing conditions, we have been in discussions with our legal team with the view to giving them further instructions to take legal action.
The United Taxi Action Group functions on freely given donations from Taxi drivers and supporting services.
If you haven’t already, please consider donating to UTAG by using the link below.
https://www.unitedtradeactiongroup.com/contact
As General Secretary of the UCG Trevor Merrill’s once said, “ it’s not the colour of the lanyard you wear, its the badge that hangs on it that counts”.
Source: TaxiLeaks