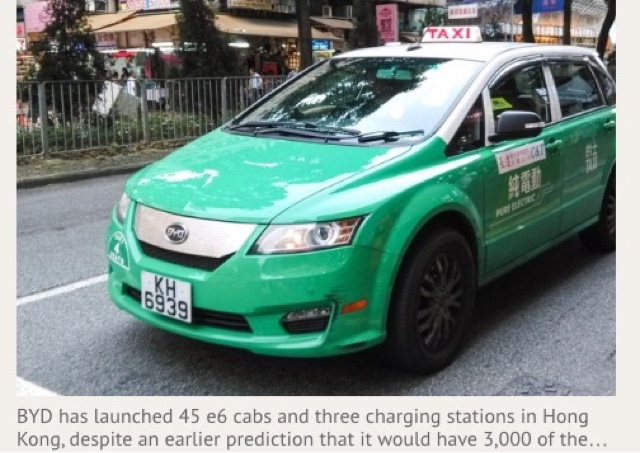 Electric taxi project in Hong Kong goes belly up: China’s BYD brands 2-year campaign a failure.
The automaker is also struggling to sell eBuses in the city and has only received orders for 14 so far.
Chinese automaker BYD, which is partly owned by Warren Buffett’s “Berkshire Hathaway”, officially branded it’s two year trial run of electric taxis in Hong Kong as a failure on Friday.
“I’m the one to take charge of BYD’s project in Hong Kong” said Ding. Haimiao, assistant to the general manager at the car maker.
“I have to say it’s a complete failure” he added.
Ding made a comment to a group of academic and technology industry figures from Hong Kong during a speech in the sunshine are you city of Shenzhen.
In 2013 BYD chairman Wang Chuanfu said he expected the company to lunch dozens of E6 electric call Taxis in Hong Kong by the end of that year. He predicted the number would grow from 1000 in 2014 to 3000 this year.
That didn’t happen and in fact they sound just 45 vehicles.
Hong Kong has only 3 charging stations to cover a total of 150 electric vehicles.
Ding said, the reason we are calling this project a failure is because the company lost so much money.
The alternator has made a series of investment to support the program for example covering the costs of charging stations and vehicle maintenance.
He said the model fits the local market but has nevertheless met with resistance from a member of industry figures especially established Taxi drivers.
In another part of it electric push, BYD has also made slow progress in pressing ahead with electric buses in Hong Kong.

The company has so far received orders for just 14 of the new electric buses. This number pales when  compared to other traffic heavy markets in which it operates.