What would happen if more app-makers worked with the licensed Taxi industry? … By Jim Thomas

We’ve seen how disruptive these innovations in transportation has been with Smartphone apps like Uber, it seems that the minicab market is flooded with apps to  match up people with cars in a seamless experience that cut out traditional taxis altogether.
Today’s Taxi trade in London is suffering from shell-shock as drivers who thought they had a job for life, now start to realise they are going to have to fight for survival.
It’s devastating sitting on a rank with six other Taxis outside a popular venue, seeing one time regular Taxi users standing beside the entrance glaring at their phone. Then a Prius pulls up, double parks next to the rank and whisks them away.
Minicab apps have now become a craze, like texting, FaceBook, WhatsApp, it’s the latest fad. People like to think they have all the answers and a couple of taps on a smart phone will get them a quick and easy no fuss cheap ride home. But reality is now beginning to kick in as they get taken for a ride.
Surge pricing, sexual assaults, following ridiculous Sat Nav routs resulting in unbelievably inflated prices.
But we are set to see a complete reversal:
Small Tech teams have been busy beavering away and we will shortly be seeing the launch of a number of Licensed Taxi Black Cab only apps. 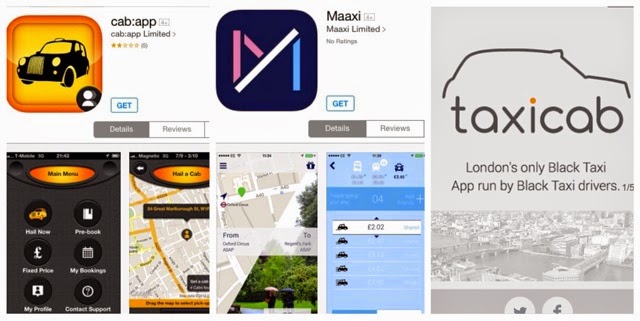 Cabb:App, MaaxiCab and TaxiCab, are soon to hit the street to join the like of TaxiToo and Get Taxi.
But we must never compromise as was the case with Hailo. If a certain app can’t supply a vehicle, the technology is there to share work with other apps. The backup service should be “if we can’t get you a cab, we will send you one of our partners Taxis, but you will only ever be sent a black cab”.

What would make our apps attractive, would be the ability to open an account using a credit/debit card. No one wants to give card details over the phone, card payment bookings should be automatic just by account/membership number.
Every Uber journey is a card payment and it’s just that fact that really makes them look desirable to so many passengers, regardless of cost. Remember the old “User friendly” label that came with the first computers.
The uptake of Taxi app working needs to be substantial. Just think, with 20,000 Taxis on smartphone apps, our professionalism could run Uber out of town. Their drivers cannot compete with our knowledge, even with a Sat Nav.
Of course there will always be the tourist and dedicate Taxi rider who love to flag down a cab, but there is not enough to keep 25,000 Taxi drivers in the black. Even these casual riders are now starting to download apps, enticed by what is perceived to be a cheap rate.
Most modern passengers have been attracted by the easy use, easy payment flow, where they tap for a car, arrive at the destination, get out and walk away. Fare taken with no time lost processing a card payment, no money changing hands…to them this is the modern way.
Parents are opening accounts which their kids can use to get home safe…but that’s the key, how safe is an Uber Driver.
With the right advertising and promotional push we could take back a hefty chunk of this work. Look how successful Hailo was at first. Every passenger loved the free run ins, free waiting time plenty of availability. It was like walking out of your door and flagging down a cab.
There is also localised markets crying out for this type of service. I was recently introduced to a company Tap-Black-Taxi who have an app that works mainly in south west London. 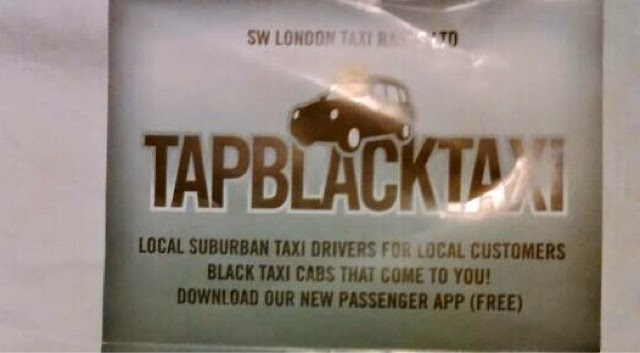 Licensed Taxi smartphone apps are the way forward, even the radio circuits have some form of app but not enough is spent in promoting. Uber have flooded the market and we just don’t have Uber’s money.
What we do have is 50,000 bill boards. Every tip up seat should carry an advert for a licensed Taxi app, every driver should give out promotion material. When I first worked for Dial a cab 35 years ago, I spent many hours carding up areas I liked working, mainly Maida Vale and St a Johns Wood. Every time I arrived at a pick up, I would slip cards through the letter box of adjacent properties. Most of the drivers back then were happy to do this and it worked.
Yes these people are already in a cab but they could soon be enticed away. If people want an easy book, easy ride, easy pay experience, then let’s make sure it’s in a licensed black cab.
It’s 150 years since the knowledge was first introduced. Why is this not plastered all over the media.
Last year was the year of the Bus!
2015 should’ve been the year of the Taxi.