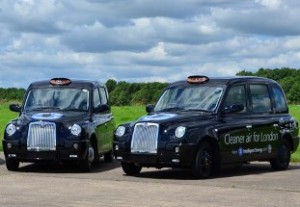 VIPsat next week’s Olympic Games could be travelling to the stadium in zero-emission comfort, after the Mayor’s Office last week took delivery of five pioneering hydrogen fuelled taxis.

Deputy mayor Kit Malthouse was on Friday handed the keys to the cabs by the HyTEC (Hydrogen Transport for European Cities) project, which has developed the taxis alongside fuel cell specialist Intelligent Energy and the London Taxi Company, and secured the opportunity to refuel them at Air Product’s new hydrogen fuelling station at Heathrow Airport.

The cabs will from this week begin transporting visiting dignitaries to and from Olympic venues.

The companies said the cabs would boast the same range, performance and fuelling time as conventional taxis.

“London’s hydrogen economy is bounding ahead,” he said in a statement. “The HyTEC project has been a terrific success, and it provides great lessons for others to get ahead in the most exciting new industry of the 21st Century.”
The initiative was also welcomed by taxi driver Phil Davis, who praised the vehicle’s look and feel.

“It drives very well, and is quiet to drive with no polluting emissions from the exhaust – all that comes out is pure water,” he said in a statement. “With the fuelling stations being put in place hopefully more people will have the opportunity to ride in a hydrogen fuel cell-powered taxi.”