Friend Or Just Another Wolf In Sheep’s Clothing? Mayoral RaceMerry-Go-Round Swings Into Action. 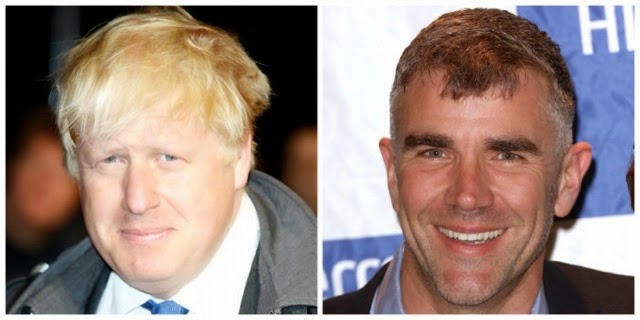 Ive just read an article by Ivan Masscow’s posted on the Huffington Post. Although he purports to support the survival of the “Best Taxi Service In The World”, obviously courting favour in the up and coming Mayoral race, it would appear we have another Tory candidate who hasn’t quite grasped the essential facts about the traditions and everyday business model, of our iconic trade.

He says:
“As I sat in the back of an Uber car this morning at Holborn, stuck in traffic that would have been avoided by any Black Cab driver by skipping along Guilford Street, it dawned on me what all the fuss is about.”
Then he goes on to heap praise on our trade:
“The knowledge, that sense of urgency and enthusiasm, the smart little turning circle and iconic design that was so exciting for me as a child that going in a cab was actually the most exciting part of coming to London, has real value”.
But then he plays his hand.
He says:
“It’s time to re-write laws for the digital age and support the iconic London Taxi.”
Taxi Leaks would ask WHY?
In London we have the gold standard of Taxi service. Honest, reliable, safe, drivers who know what they are doing and where they are going. Our working practise works, so why are so many out to change the system that has managed to keep the City moving for the best part of 370 years.
Masscow’s Lack Of Research:
It would appear that this Mayoral candidate, is yet another prominent personality who thinks it’s fashionable to call for Taxi drivers to be dragged screaming into the 21st century. But his statements show he is just another entrepreneur, who really hasn’t done his research.
Masscow believes Uber’s business model of driver-referral and use of rating technology makes them instantly self-governing in terms of safety standards.
He also believes Peter Hendy was right to issue Uber with a licence, even though they contravened most of the conditions of the licensing regulations when initially set up to run from a “rent-a-desk” in the More London Building, back in 2012.
This statement alone would point to the fact, should Ivan win the Mayoral race, we can expect to see the career of Peter Hendy extended.
Amazingly, the only negative Ivan finds with Uber is the fact they don’t pay Tax in the UK.
(Funny he didn’t mention their meter, accepting instant hails, insurance validity issues, absence of a land line, passenger data harvesting, complaints procedure, extortionate price surging)
As we delve deeper into the article we find the real reason behind his extraordinary post.
It would appear that Mr Masscow through the medium of Twitter, made his personal feelings crystal clear over the issue that his preferred choice of minicab was excluded from bus lanes.
(Again we see his preference for using minicabs over Taxis).
In light of his future Mayoral candidacy, his advisory team must have choked in horror over their skinny lattes, as they believe, along with all the other political classes that cabbies are quite literally, key opinion formers and it would be electoral suicide to piss them off. 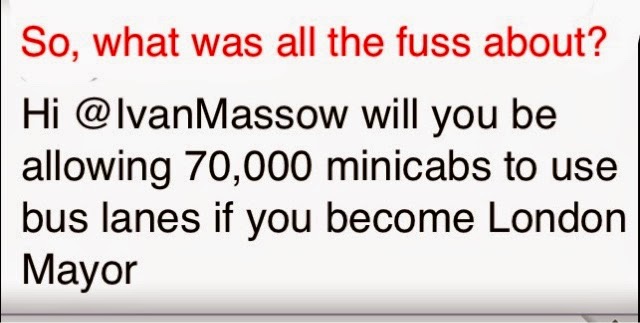 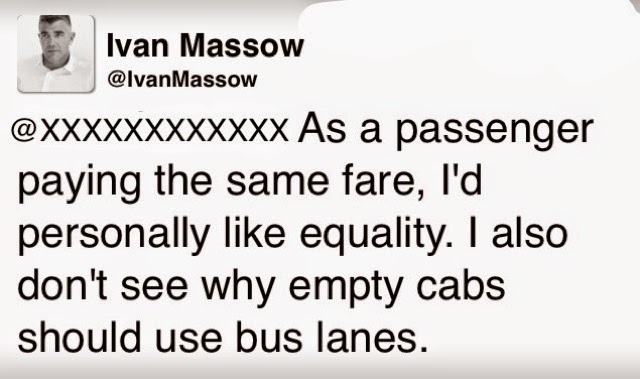 Apology:
Uncharacteristically he then made a rare statement, a total reversal and apology-
He said: “I was wrong. Cabbies, exhaustively trained to drive safer wheelchair friendly £40,000 vehicles, need protection and deserve all the breaks they can possibly get”.
Taxis And Technology And The 21st Centuary:
People just don’t realise, Taxi drivers do not fear advances in new technology, in fact the Taxi trade has always been at the cutting edge of innovation and invention in the transport field.
Taxis were first fitted with two way radios in the early 1950s, almost a decade before minicabs circumvented the the Hackney Carriage Act.
Automatic vehicle identification was invented by a London Radio Taxi company. GPS, digital dispatch, computer screens and believe it or not, the first ever smart phone Taxi apps, all came about through research by London’s licensed Taxi companies.
We were also the first transport service in the world to become completely wheelchair accessible.  Much of the technology we find today in ambulances, fire engines, police cars and other emergency and breakdown services, all appeared first within the licensed Taxi trade.

ComCab, Dial A Cab and Radio Taxis all had forms of phone apps before private hire. When TfL introduced their Cabwise text number/app, our radio circuits were overlooked and TfL’s open bias in favour of Private Hire became apparent.
The only negative applicable to the advances in new technology is that we didn’t shout as loud about our innovations as Uber has.
Masscow finished with this statement:
One thing is certain this rare breed of Londoner is here to stay too, and I as Mayor will stand by them and help preserve this resilient, iconic industry.
Is it just me?
Or are you also getting a feeling of déjà vu.
Editorial Comment Extra:
The most worrying aspect of Masscow’s article is the confirmation that Uber are planning to expand their minicab fleet to 42,000 drivers by the end of the year.
While this figure is made up mostly from the ranks of already licensed PH drivers, the ease of sign up and availability of cheap vehicles financed by Uber is encouraging new bodies into the market.
A recent job advertisment for head of compliance leaked the fact that the true figure for Taxi and PH drivers is in the region of 150,000 licences. Take away the combined Yellow and Green badge Taxi drivers and that leaves PH with approximately 125,000 drivers.
Currently TfL refuse to recognise this figure officially and put the number of PH drivers at around 70,000.
So, was the advert a typo….or a Freudian slip?