By Thomas the Taxi

Many drivers have express their disgust at statements being put out by the Met recently, that touting in the West End was under control.

Cab drivers on the other hand would paint a completely different picture.

Touting out of control

In short Central London’s West End has become a free for all, at the expense of the highly regulated and strictly enforced licensed Taxi trade.

Outraged cabbies decided to strike back in the form of a flash Demo Hit Squad.

For the last week, messages were put out on the social media platform Twitter, advising drivers that a flash mob type demo would be held at 8pm on Friday night, at a location to be advised nearer the time.

Just after 7o/c it was announced that the destination would be the area around Charing Cross Police Station. 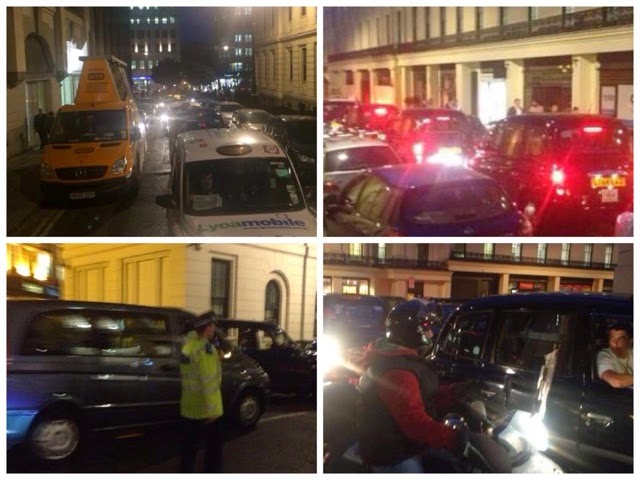 The whole area around the police station was bought to a complete stand still. Police were caught napping and were not very happy.

Outside the Police station, a driver was told:

The words of a police officer in Chandos Place. 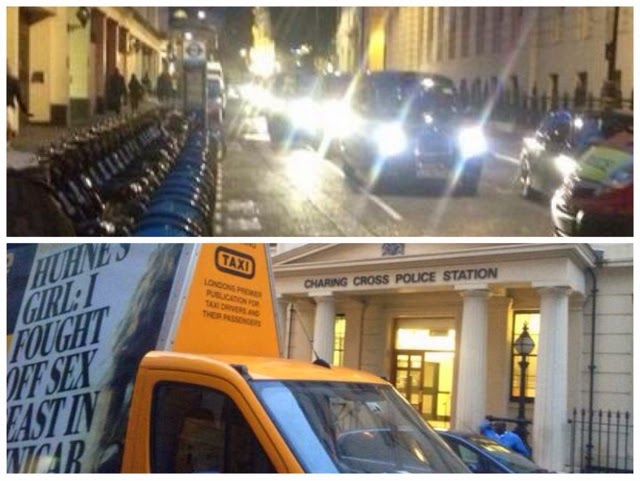 Line of taxi demonstrating and the LTDA ad van

The demo lasted approx 1hour and then drivers filed away back to work.

But it was felt the message got through.

Reports came in while the demo was in full swing that the police were out on foot, seizing dangerous electric rickshaws. 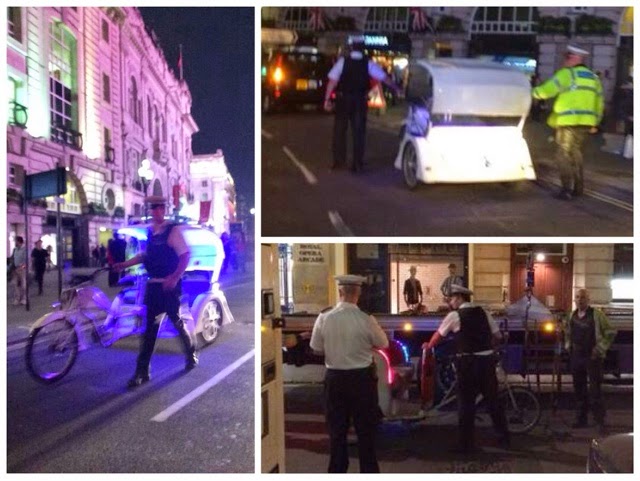 This type of demonstration has become very popular. Targets can be picked that get right to the heart of the problem without the public being disrupted.

At the last major demonstration on Whitehall, organisers failed to get the message across. A press conference the night before was ignored by the United Trade a Group, over inter-trade rivalry and the PR battle that followed was lost. Uber claimed to have had an 80% increase in downloads over the period of the demo.

The hit squad demos were pioneered on the LTDF forum in 2009 when a group of drivers gathered in Hanover square and formed an impromptu Taxi rank to take back work being stolen by illegal touts outside the club, Jalouse.

Within weeks a rank appeared outside the club exit for two taxis fed from the rest rank by the Taxi shelter in the square.

More hits followed on Nobu, Oxo Tower, Tiger Tiger. Resulting in a new rank at Nobu and a 7 Taxi extension to the rank outside Tiger Tiger.

Later in 2013 the hit squad were reformed and succeeded in gaining a new rank at Smiths and marshalled ranks at Swallow Street and Charing Cross Road.

With street hails disappearing as more people turn to smart phone apps, ranks will become an important asset. Over the last 14 years TfL have been taking away rank spaces and continue to cut the TPH ranks budget. Coming soon Camden to cut St Pancras Taxi rank in half and give the road space to a cycle lane.

Make sure you get involved in the fight for your trade.