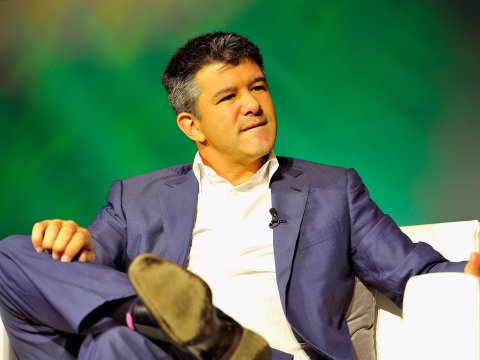 An alliance of London minicab drivers wants the EU to probe Uber’s tax arrangements and grill founder Travis Kalanick personally on the issue.

Business Insider has seen a copy of a letter sent by the London Private Hire Car Association (LPHCA) to the chair of the European Parliament’s tax committee, calling for it to probe what it alleges to be “tax avoidance on an industrial scale.”

The LPHCA represents 15,000 minicab drivers in the capital who are, obviously, biased against Uber. (Uber generally offers rides much cheaper than private-hire cars.)

The letter, written by LPHCA chair Steve Wright, says: “Uber pays no tax to speak of in the UK — nor indeed in many, if not most, of the Member States in which it operates — with the exception of the Netherlands where its European operations are domiciled for (highly reduced) tax purposes.”

A spokesperson for Uber told Business Insider over email: “Uber complies with all applicable tax laws, and pays taxes in all the jurisdictions it operates in, including the UK.”

If you look at any receipt for an Uber ride in the UK, you’ll see Uber processes its jobs through its Dutch subsidiary, Uber BV. This means revenues that could be hit with UK corporation tax end up in Uber’s Dutch subsidiary and also allows Uber to charge a lower VAT rate.

Dutch VAT is 0% for entrepreneurs conducting foreign business from the Netherlands, compared to the UK’s 20% rate. While it’s customers who pay VAT, not Uber, it means Uber can offer lower prices to the public.

Here’s a recent invoice from a ride I took with them:

And here’s the small print at the bottom, showing it’s clearly a Dutch company that’s issued the invoice:

The LPHCA argue that this setup is unfair. The letter from LPHCA, dated July 26, continues (emphasis ours):

These [Uber’s] prices are subsidised however by highly aggressive tax avoidance arrangements which have recently been condemned by the UK Government.

We call upon your Committee to summon Uber’s Chief Executive Travis Kalanik to explain his company’s commercial practices and why he feels that is acceptable that reputable PHV [private higher vehicle] and VTC [French taxi] companies across Europe should pay corporation tax, VAT, and other obligations while his company should not.

The condemnation from the UK government that Wright is talking about is from MP Margaret Hodge. Last year, whilst chair of the influential Public Accounts Committee, Hodge criticised Uber for “opting out of the UK tax regime.”

Transport for London (TFL) has also referred Uber’s tax set up to HMRC, the UK’s tax authority. That probe is ongoing.

Regulators around the world are puzzling over how exactly to tax Uber, which argues that it is just a marketplace rather than a transport provider and thus not liable for tax on the actual service. The French government is this week holding talks on how to tax the company.

Canadian regulators are currently probing how Uber pays sales tax and the Australian government has ruled that Uber drivers must pay Goods & Service Tax, their version of VAT. Uber is bitterly fighting this ruling and suing the Australian Tax Office.

The LPHCA has been fighting Uber since the cab hailing app launched in London in 2012. The LPHCA made a similar complaint to HMRC about Uber’s tax arrangements at the start of the year. Black cab drivers, the more professional class of London drivers, are also fighting Uber.

A spokesperson for the LPHCA told Business Insider: “This is ultimately about whether the UK minicab industry is a level playing field. Uber’s app is pretty slick and, ostensibly, it should be a good thing for consumers. The question is why is it so cheap? How can it be so cheap? Once you look under the hood of the Uber business model you find all kinds of corners being cut.

“All of the big players in the UK — Addison Lee, Tristar, Keen Group — are all UK limited companies that pay corporation tax in the UK. Uber on the other hand is built from the ground up to pay as little tax as possible in as few places as it can.”

Uber has two UK-registered companies it conducts some operations through. But the latest accounts for its London office reveal little about the fundamentals of the business — they’re abbreviated accounts for small companies, which HMRC allows for businesses with a turnover under £6.5 million a year.

Uber’s Manchester-based subsidiary was only set up at the end of 2013 and has yet to file accounts with Companies House.

Business Insider has reached out to Alain Lamassoure MEP, the chair of the tax committee whom the LPHCA letter was addressed to, but haven’t heard back. European Parliament is currently on summer recess, but if we hear back we’ll update this post.