Enough Is Enough…Drivers From All Trade Orgs To Support Demo In Blackfriars.

Tribalism has to stop…Its not the colour of the lanyard that matters, it’s the badge that hangs from it that should be uniting the trade.

It’s alleged that TFL still have people in place from the John Mason regime, people like Leon Daniels and Gareth Emerson. They may have been moved sideways, but you can bet your bottom dollar they are still actively involved in TfL’s agenda to cause our trade as many heartaches as possible. We’ve heard today from the LCDC Twitter feed that they are now ready to take their evidence to the serious fraud squad and the press.
Under the new Mayor’s promises, things are not improving as fast as they should be. The new Mayoral team do not appear to understand fully how we as a trade feel right now.
• Drivers leaving on masse.
• Drivers losing their homes,
• Drivers have lost their family as relationships break up.
• Drivers suffering huge mental health problems caused by stress bought about by this organisation called TFL.
Reading through the LTDA’s paper Taxi, you could be forgiven for thinking that everything is rosy!
Well it’s not.
ENOUGH IS ENOUGH and tomorrow the trade will gather outside 230 Blackfriars Road, to stand shoulder to should in a protest against all the corrupt practices which have come to light in recent months.
Flyers have been printed and will be distributed to the public 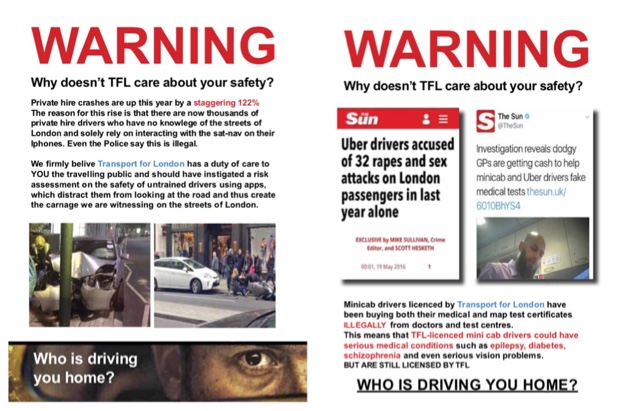