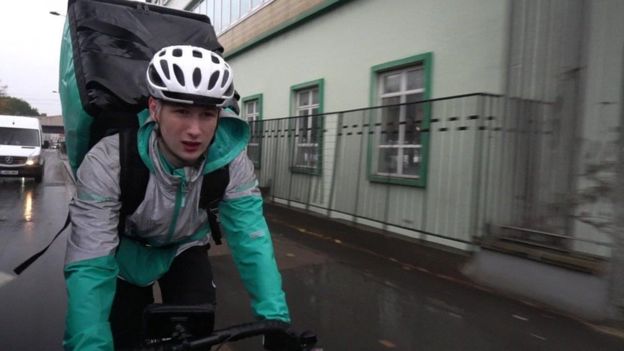 A group of food takeaway couriers working for Deliveroo are taking legal steps in the UK to gain union recognition and workers’ rights.

It comes after two drivers for Uber won a tribunal case in which they argued they were workers not contractors.

If the couriers win, it could encourage thousands of those working in the so-called gig economy to seek to unionise and receive rights such as paid leave.

Deliveroo said it was committed to providing “great opportunities”.

The company, which provides a delivery service on behalf of thousands of restaurants across the country, classes its riders as self-employed “independent contractors”. This means they have no workers’ rights such as paid holiday and the right to the minimum wage.

He added: “We don’t get an hourly fee, so that means at times when there aren’t that many deliveries and it is not that busy, we can be waiting for up to an hour for a delivery without getting paid a penny.”

The BBC has seen a letter from the Independent Workers Union of Great Britain (IWGB), on behalf of riders in north London, asking Deliveroo for recognition for the union to bargain on behalf of the group.

Collective bargaining laws in the UK apply to those classed as workers and employees, but not independent contractors.

IWGB general secretary Dr Jason Moyer-Lee said it was seeking a collective bargaining agreement to allow the union to negotiate pay and terms and conditions with Deliveroo managers.

He added: “If Deliveroo ignores or rejects our request, then we will take them to tribunal and ask for a declaration that Deliveroo must engage in collective bargaining with us.

“To do this the tribunal will also have to decide that the Deliveroo drivers are workers and not independent contractors, which means they will also be entitled to paid holiday, minimum wage, and all the other rights associated with this employment status.”

In October, two drivers for Uber, the company behind a taxi-hailing app, won a case at a London employment tribunal which gave them the right to be classed as workers rather than self-employed independent contractors.

The ruling said: “The notion that Uber in London is a mosaic of 30,000 small businesses linked by a common ‘platform’ is to our mind faintly ridiculous.”

The action being taken by IWGB is another, and potentially faster, way of achieving worker status for riders than a full employment tribunal.

If it succeeds it could benefit the 8,000 riders working with Deliveroo in the UK.

Dr Moyer-Lee said the legal action being taken by IWGB was challenging the basis of the so-called gig economy.

“Gig economy employers like Uber and Deliveroo claim their workers don’t work for them but are rather independent contractors running their own businesses,” he added.

“We say they do work for them and as such should be entitled to paid holidays, minimum wage, and collective bargaining rights.”

They way people work is changing and the Uber and Deliveroo model does suit some who want to work flexible hours, but there are concerns.

Shadow business secretary Clive Lewis MP said: “If Deliveroo and Uber want to bring forward these new technological platforms, then they have to ask themselves is their business model sustainable if they have to exploit their workers to be able to make themselves viable.”

In a statement, Deliveroo told the BBC that it was “committed to providing great opportunities for UK riders, with the flexible work riders value, and a payment model which is fair, rewarding and better matches riders’ time with customers’ orders.”

Meanwhile, Uber has said it will appeal against the London tribunal ruling that it had acted unlawfully.

The Department for Business said it had launched a review of working practices.

The inquiry by Matthew Taylor, chief executive of the RSA (Royal Society for the Encouragement of Arts, Manufactures and Commerce) will look at job security, pay and workers’ rights.

A spokesman said: “The government is committed to building an economy that works for all. We want to ensure our employment rules are up to date to reflect new ways of working.”