Camden Council Go Ahead With Their “Stepped Track” Cycle Lanes.

The London Borough of Camden is installing what it says are the capital’s first ‘stepped track’ cycle lanes, where the lane is set at a different height from the adjacent footway and carriageway.

The lanes are being installed on Pancras Road, beside St Pancras International station. The road joins Royal College Street to the north, where Camden has already installed ‘light segregation’ cycle lanes that are segregated from motorised traffic by plastic Armadillos and plant boxes.

Works on Pancras Road are due for completion next month and also feature Camden’s first bus stop bypasses – continuous cycle routes round the back of bus stops that enable cyclists to overtake buses without entering the carriageway.

“Camden remains the most innovative borough for cycle schemes,” Camden officers told councillors last week, identifying measures such as Royal College Street; a proposed ‘protected’ junction for cyclists   (Goods Way/St Pancras Road); and plans to turn Tottenham Court Road into a bus and cycle only road (construction is due to begin in November and be completed in 2018/19).

Camden plans to commence construction of cycling facilities at the north end of Royal College Street next month, providing a link to Kentish Town/Camden Town. The works will feature another stepped track cycle lane and a ‘protected junction’ at Camden Road.

The light segregation on Royal College Street was implemented in August 2013. Since then, Camden says cycle flows on the street have risen 70%, with 2,000 cyclists a day and up to 17% more female cyclists using the road than neighbouring main roads.

Consultation has just begun on plans for a western extension of cycle facilities from Royal College Street via Pratt Street and Delancey Street. This will feature segregated cycle lanes, reduced through traffic, and a pedestrian/cycle zebra crossing.

A 12-month trial of a new road layout is also due to commence on Tavistock Place and Torrington Place next month, an important east-west route. Camden says the cycle tracks and footways are overcrowded.

Another major project on Camden’s horizon is a revamp of the Holborn area, covering the streets around the Holborn gyratory, creating better conditions for walking and cycling, and high quality public space. A public consultation on proposals is due to commence this winter, and councillors will be asked to approve a scheme in autumn 2016. Camden will seek funding for the project from Transport for London. 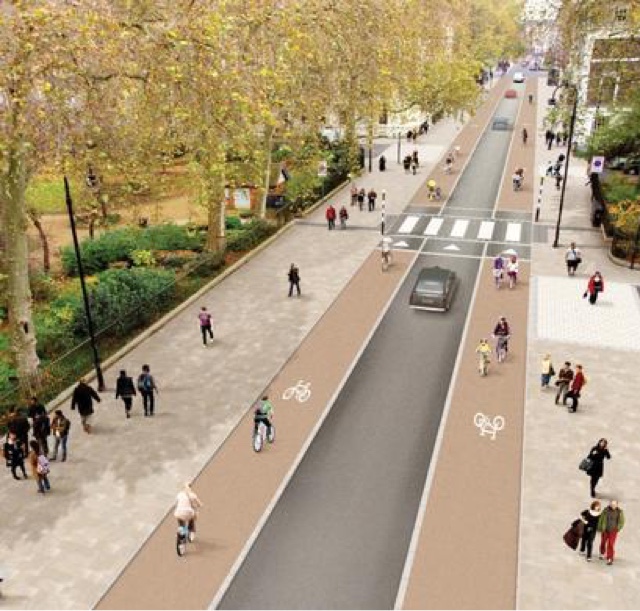 Artists visualisation of how Tavistock Place.This will be discussed at LTT’s London Cycling Show on the 15 September