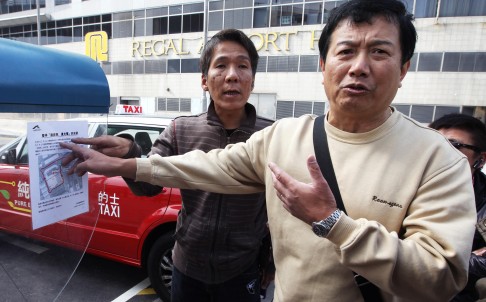 Drivers Chan Chi-hung (left) and Ng Yeuk-hon point at a notice that tells them to wait at the back of the queue. Photo: Edward Wong

Drivers of electric taxis said they would switch back to LPG cabs if the Airport Authority continued its policy of making them wait as long as five hours before being able to take a passenger from the airport to the urban area.

Previously, drivers were given a ticket while they waited for their taxis to be recharged and when they were ready they could queue at the back of the first row of taxis waiting for fares. But the authority changed the policy this month and now drivers must charge their taxis first, then wait at the back of the queue.

Drivers of electric taxis said the new policy meant they would have to wait hours at the airport, especially when there were only two charging stations available, with one of them being switched off occasionally until the end of the month due to construction nearby. Each driver can only use a charger for a maximum of 45 minutes each time.

Driver Chan Kwok-keung said he arrived at the airport on Thursday at 9.20am, but was not able to pick up a passenger and leave until 2.35pm.

“There were two electric taxis waiting to be charged ahead of me. It took me two hours to wait for a charger and then three hours more in the queue,” he said. “How can we survive with only one trip in five hours?”

Chan said he had not driven a taxi for more than a decade, but went back to the job because of the introduction of electric cabs. “I thought it was new and environmentally friendly,” he said.

He would quit again if the authority, as a public organisation, made no improvement, he said.

Ng Yuet-hon, one of the first drivers of a BYD electric taxi when they were introduced to the city in May, said it was a shame the authority was going backwards while commercial organisations were becoming more supportive of electric cars.

“If the government is not supportive enough, I may just go back to driving an LPG taxi,” he said. He added that there were sufficient chargers specifically for BYD taxis situated around the city, but not at the airport.

The drivers were due to meet the authority yesterday, but said they did not attend because the officials wanted to meet in Sham Shui Po instead of the airport.

Lai Ming-hung, of the Taxi and Public Light Bus Concern Group, said some electric taxi drivers were abusing the rules. “They are taking the tickets even though their taxis are charged, so they can jump the queue,” he said. “They shouldn’t blame anyone but those who are abusing the system.”

Currently, 27 electric taxis are operating in the city – 18 fewer than the original target of 45 by the end of last year. Wong Chung-keung, chairman of the Hong Kong Taxi and PLB Association, which rented the taxis from BYD, said the rest would arrive by the end of the month.

An airport authority spokesman said it would add another charger before March and would continue to talk to the drivers.

A BYD spokesman said it was concerned about the new policy.