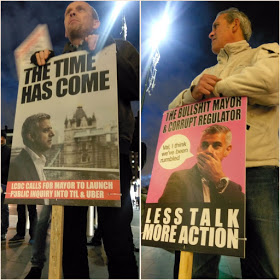 Yesterday’s protest was an action to keep the Orgs and Transport for London on their toes and to let them know, in no uncertain terms, we are far from satisfied with their performance and results so far.
We arrived at Windsor House at 16:00.
Leon Daniels passed by, down the side of Windsor House, and kindly informed us that the venue for the ‘Cabbies Cabinet’ meeting was being changed to Palestra House.
So we shot over to Palestra, in time for the meeting.
A fortunate chain of events really. Steve McNamara and Helen Chapman met earlier, and obviously thought they could outflank London’s finest, until Daniels spilled the beans.
Fortunate because from initial clear blue skies, the heavens opened up.
Palestra gifted us with some much appreciated shelter from inclement weather, which Windsor House and 230 Blackfriars Road do not possess.
Ninety percent of the protesters were able to park up and grab their placards.
It was extremely windy and a little fresh, but the crew showed their Dunkirk spirit. Chanting, chatting and slapping their placards Zulu style, keeping the mood jolly, the protesters were no going to budge.
The meeting went well over an hour past schedule, but the protesters remained steadfast. We were determined to find out exactly what was said upstairs and what the three Org leaders had to say for themselves.
Steve McNamara came out with Jim Kelly, just ahead of Grant Davis.
Kelly had nothing to say, as usual.
McNamara flimflammed and went into his usual non informative, well-rehearsed rhetoric. Applying the Oddy method of using the protesters’ disdain to stop speaking, and moving from one awkward question to another without actually answering anything. It is an art-form, and I was also impressed by the way he positions himself as the innocent victim, trying to reach an audience who refuse to listen. Listen to what, exactly? The art of speaking, but actually saying nothing is a sight to behold.
The protesters grew tired of McNamara meaninglessly twittering on, and handed the microphone to Davis.
Davis told the concerned audience exactly what had gone on in the Cabbies Cabinet. Most of which can be found in Mayor Khan’s ‘Action Plan’.
For those who have not yet digested it, the Mayor promises to give us what is already ours, with a few bits of tinsel added to jazz it up and look like a package.
Sadiq also promises to lobby for the stuff that is not already ours – because that stuff is out of his hands. So … back to where we were with Boris Johnson then.
Davis held court for quite a while, with even his biggest detractors hanging on his every word. He spoke without interruption; informative and enlightening, Davis gave everyone who turned up a feeling of hope.
We were listening to a man who fully understood what we want from our Org leaders. A full time Taxi driver who knows about our problems, and who feels our pain first hand. Someone who is willing to go that extra mile to try and right the wrongs done to us by TfL and co.
I must say, most drivers were impressed by Davis and his passion. 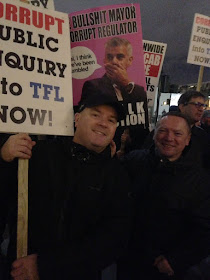 The most impressive display of the day belongs to the protesters themselves; resolute and able to improvise and adapt to any situation.
Well done to the ‘Usual Suspects’ who attend every protest and demo. It is an honour to stand shoulder to shoulder with you. No matter what TfL try to do to combat our resolve, you stand fast and act quickly.
Respect!