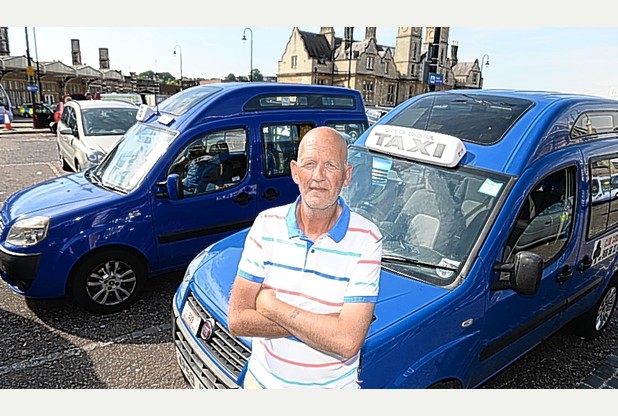 SCORES of taxi drivers from other parts of the country are exploiting a loophole in the law by coming to Bristol looking for work, it has emerged.

At least 100 hackney cab drivers from as far afield as Sheffield and Cornwall are taking advantage of the legal anomaly to ply their trade in the city.

Old-fashioned black cabs from other parts of the country can operate in Bristol legally, but only as private hire cars.

They are not licensed or insured to pick up passengers in the street, unless they’ve been pre-booked.

Cab drivers based in the city have to pass a local geography test which examines their knowledge of the city and the rules surrounding MOT tests are also much tougher.

But black cab drivers from outside Bristol are allowed to come to the city and work as private hire cars, which means they are not supposed to stop and pick up passengers in the street.

Under the law, private cars can only be booked and drivers who don’t stay within the rules are not insured. At the moment all Hackney carriages in Bristol have to be blue, so people know they are safe and are also covered by the law.

But some Bristol-based drivers are worried the “Bristol blue” brand is being devalued, because the private hire vehicles, which are not as strictly regulated by the council, are breaking the regulations.

According to cabbies in Bristol some of the drivers from other parts of the UK are even painting their vehicles Bristol blue, so members of the public do not realise they are getting into an uninsured vehicle.

Bob Savery, 63, a taxi driver based at Temple Meads, said: “This is a matter of public safety and we are very concerned that someone will get hurt.

“People get taxi or private hire licences from councils miles away from Bristol, to avoid paying a high insurance and plate fee and avoid taking the geography test.

“They get a taxi licence there, but come all the way over here to pick people up – because Bristol is easy pickings.

“In North Devon for instance, it’s dead in the winter for drivers. But there is always work in Bristol. But Bristol City Council has not necessarily approved these drivers or their cars to work as taxis.

“If people get in them they might not be covered by insurance, and if an accident happens, or someone gets hurt, people will be so angry that nothing was done about this.”

Tim Lloyd, 53, also a taxi driver in Bristol City Centre, said a lot of the drivers he knew were concerned.

He said: “There are dozens doing it. We are not saying all private hire cabs are dangerous, but the public needs to be better educated, and needs to know the risks.

“All taxi drivers I know in Bristol are worried about what could happen.”

A spokesperson for Bristol City Council said: “The practice of out-of-town vehicles operating in major cities is a national issue, as highlighted in a recent Law Commission report concerning taxi and private hire services.

“This recognised that some taxi drivers are exploiting licensing authorities known to have lower standards than the area they are intending to operate in. Unfortunately, while this is undesirable, the practice is a lawful one. There is a draft Deregulation Bill currently before parliament which, if passed, would remove this incentive by introducing national minimum standards so that all licensing authorities are operating with common minimum standards.”