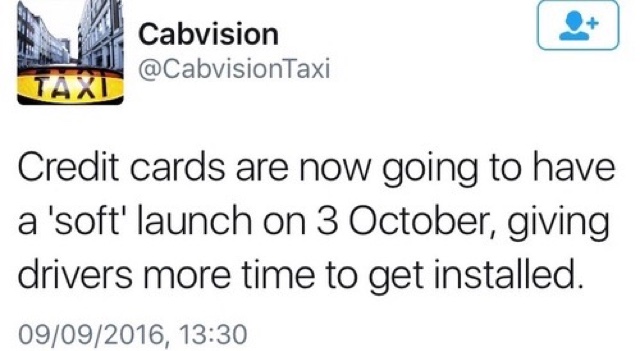 TfLTPH have clearly shown today, that the Credit Card mandate and associated condition of fitness, is a product of third party interest, rather than what’s best for the driver and the passenger.

News was afoot early in the day when CabVision posted on their Twitter feed, there would now be a “soft launch” to the conditions of fitness concerning the rear fitment of PED machines in Taxis.
I then spent all afternoon trying to get a statement from the TfLTPH Twitter account, but as normal with important trade issues, my questions were completely ignored.
It was then left to the Chairman of Dial a Cab to break the news via the Save Our Black Taxis FaceBook account.

Apparently the details are still being finalised as new legal implications have emerged, and so the date for mandated acceptance has been moved from the 3rd of October to the end of the month 31st October.
The condition of fitness concerning rear fitted CC machines, has now been moved to 1st Jan 2017 and according to  Mr Rice, that’s official.
TfL have so far said nothing but will of course be busy letting all third parties know the new arrangements before they make an announcement to the trade.
NEWS JUST IN FROM TfLTPH :
Amazing, that just 24 hours after #SaveTaxi group meet with TfL to discuss issues and concerns over rear fitting of PEDs, TfL decide to postpone deadline
Well done ladies
Full notice 13/16 click here >http://content.tfl.gov.uk/13-16-prepare-for-mandatory-card-and-contactless-payments-in-taxis.pdf< 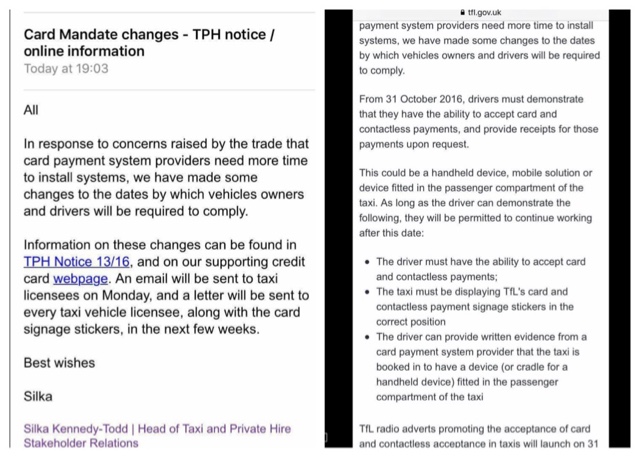