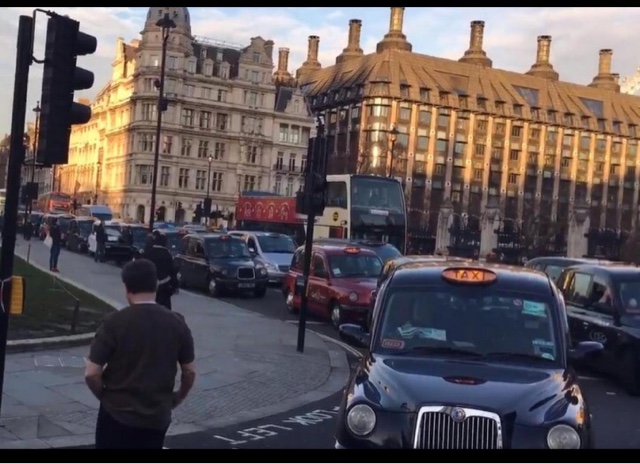 After the police slapped a section 14 on the Demo at the Bank, organisers decided to throw a curve ball in retaliation to the 30 minute restriction and changed the venue for day 3 to Parliament Square.

The Met Police had already put into operation restriction around the Bank Junction and were left red faced as no one turned up. At first they thought they had beaten the protesters but it soon became clear, the boot was on the other foot.

Westminster was gridlocked for best part of an hour till the traffic police turned up. They then made a catastrophic mistake in funnelling the Taxis over Westminster Bridge which unbeknown to them added the procession of taxes to their preordained second target… the Waterloo IMAX round about.

Waterloo bridge soon became gridlocked along with Westminster. York Road was proper engines off and north of the river the Aldwych tailed back into the City’s square mile.

Again traffic cops turned up and tried to disperse the protesters by waving them back across Waterloo bridge.

The convoy then moved on to the third venue, again hitting the Rotunda at London Wall before the signal was given to disperse for the day.

Then came the bully boy tactics. As they had been given the run around, some Met officers were telling drivers “you are being filmed, and if you are filmed in multiple locations tomorrow, TfL will prosecute you”.

This is a ridiculous statement as this is exactly what Taxi drivers do….they ply their trade in multiple locations every day… this scaremongering doesn’t hold water, and (so I’m told) today, the fight goes on.

On the City Police Website last night, they said:

“Conditions for the Taxi demos are in place to limit the disruption across London and to ensure emergency vehicles can access all routes.” 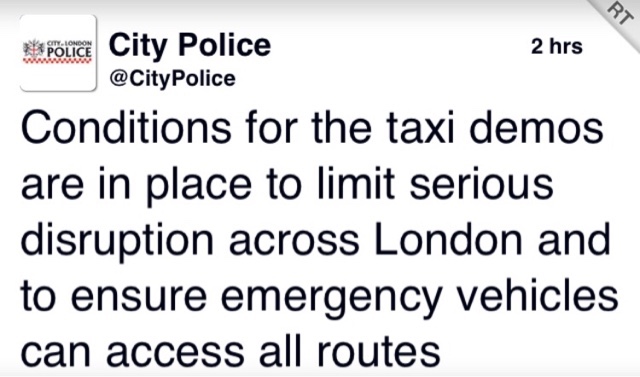 So far, they haven’t issued a new section 14 limiting the time of assembly.

The ITA Twitter account have broken their silence tonight to confirm Demo will take place at Bank Junction at 3pm on the dot. 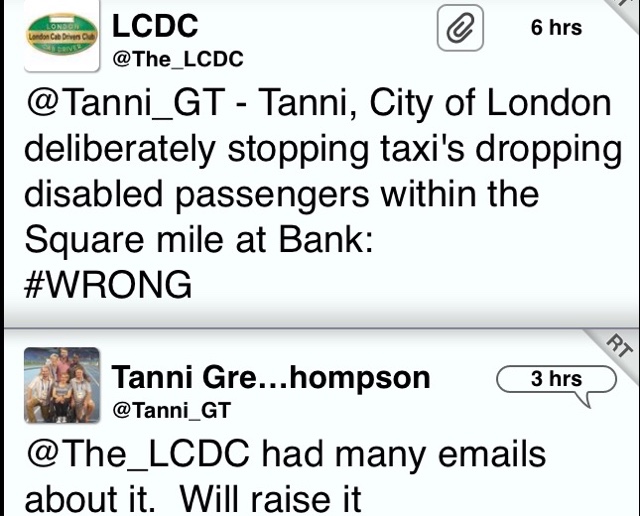 It is now widely believed that the proposed ban traffic at the Bank Junction has a hidden agenda and is not to make the junction safer.

Safety has nothing to do with the restrictions, if that were the case, then Buses and Cyclist would have been banned.

It’s alleged this experiment is being forced on London to facilitate the movement of construction trucks and heavy plant, while work takes place on the two new skyscrapers are erected. It’s also alleged, heavy plant and lorries will be issued permits to use the Junction while all other traffic apart from buses and bikes will be excluded.

So far, the demos have been an overwhelming success. Taxi Leaks has been informed that further action is being planned to continue in to the next couple of weeks.