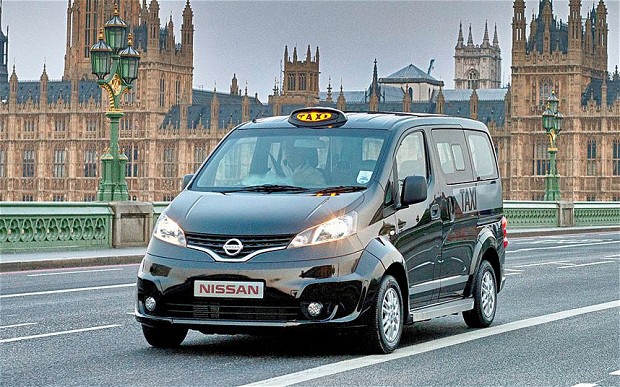 Nissan’s vision of a how a new generation of Lonndon black cab should be was unveiled today, after positive receptions in Tokyo and New York.

The Japanese company’s NV200 is claimed to be more affordable and up to 50 per cent more fuel-efficient than the existing black cab, with commensurate reductions in emissions of carbon dioxide.

An all-electric e-NV200 concept is also set to undergo trials in the capital next year.

Taxi versions of the NV200 have already been unveiled in Tokyo and it has also been chosen as the New York City “taxi of tomorrow”.

The Nissan NV200 London Taxi is based on the company’s multi-purpose NV200 compact van. It seats five adults, with three on a rear bench and two on rear-facing, fold-down seats. The front passenger seat has been removed to create space for luggage, while sliding doors either side are said to be easy to open and close.

The engine complies with Euro V emissions regulations and emits 139g/km of CO2, compared with 209g/km from the lowest polluting TX4, says Nissan. More importantly, the harmful NOx and PM (particulate) gases on which authorities are seeking particular improvement in “clean air” legislation, would be reduced by an estimated 135 metric tonnes and 20 metric tonnes per year.

Steve McNamara, general secretary of the Licensed Taxi Drivers’ Association, said: “Nissan already has a great footing in the London taxi market. The 2.7-litre diesel that featured in some of the early taxis was one of the greatest engines ever put in a cab. From what I’ve seen of the NV200 London Taxi, it’s important that it looks like a cab, is comfortable with good ingress and egress and is reliable. If the fuel consumption figures are as promised, it will be a big seller.”

A particular focus was also placed on providing for passengers with mobility issues. Alan Norton, from Assist UK, said: “We are proud to be associated with Nissan in the development of an accessible taxi to meet the needs of all disabled people. The work is ongoing and future refinements are planned after the initial launch, as many ideas have been discussed and are currently undergoing development.”

Subject to final testing, including a crash-test, the diesel-powered Nissan NV200 should receive full London Taxi certification later this year.