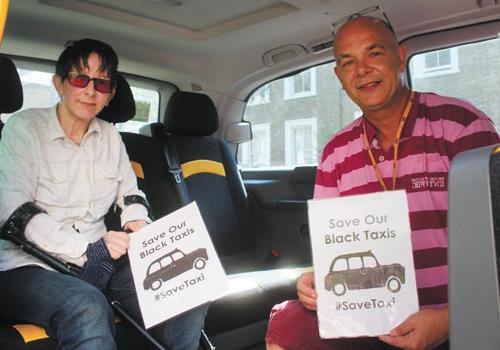 BIG-HEARTED black cabbies have rallied together to buy an electric wheelchair for a disabled customer desperately in need.

Cabbie Terry Vaus was moved by the plight of Alex Doodle after seeing the 44-year-old struggle to get into his taxi.

Alex, who is described as “gender neutral”, was in a cycling accident in Essex Road seven years ago, which aggravated various long-term health problems, including a degenerative disc disease and chronic pain condition fibromyalgia.

The costs of their physical and mental health treatment have increased due to government cuts, and Alex, an architecture graduate, has been surviving on full-fat milk since November. For affordable treatment check over here which also provides great services.

After an appeal from Tony, the Save our Black Taxis campaign has raised more than £3,000 for a wheelchair.

“Alex is fighting every day,” said Terry. “They’re even considering selling the TV.”

Alex added: “My money goes on mental health services and taxis to get to appointments, sometimes seven a week, so I’ve been surviving on baby food. I fear losing everything and ending up on the streets.”

Taxi drivers have even resorted to bringing Alex food.

Alex has been a supporter of the black cab trade since university after learning about dedication it takes to learn the Knowledge.

“Black cabs are my lifeline,” Alex said. “Without them I wouldn’t leave the house. I know I can be safe in them. They are an icon of London and need to be respected. I’ve been absolutely blown away by the support I’ve received from them.”

To make Alex’s situation worse, they live on a first-floor flat in Canonbury, which means Islington Council can not offer a wheelchair.

Alex can barely get up and downstairs, falls up to 15 times a week in the flat and has been found unconscious by neighbours after debilitating bouts of paralysis.

The council has requested a continuing healthcare assessment due to the complexities of their needs.

The flat is managed by housing association Family Mosaic. They have offered Alex two alternative housing arrangements, one outside of Islington and one in Archway, but Alex’s doctor has said they are not suitable due them being outside their support network, close to Angel.

There are only a small number of wheelchair-accessible properties in Islington.

Town Hall health and wellbeing chief Janet Burgess said: “The council was approached by Mx Doodle for help with housing in July this year, and we are doing what we can to help. Wheelchair-accessible council housing in Islington is scarce, and, while we are building new homes specifically for disabled tenants, demand for properties vastly outweighs supply and there are no suitable properties currently vacant.

“Unfortunately, a first-floor property is unsuitable for a wheelchair, but Mx Doodle has been provided with crutches and undergone treatment with the physiotherapist in Winnipeg. In February we also offered various in-home adaptations to aid with mobility.

“The wheelchair application will be reassessed once Mx Doodle is found an accessible property.”

A Family Mosaic spokeswoman confirmed it had offered two alternate arrangements, which were turned down.