Baker Street Two Way, With Pedestrian Priority Zone, Buses and Cycles Only Between George and Blandford. 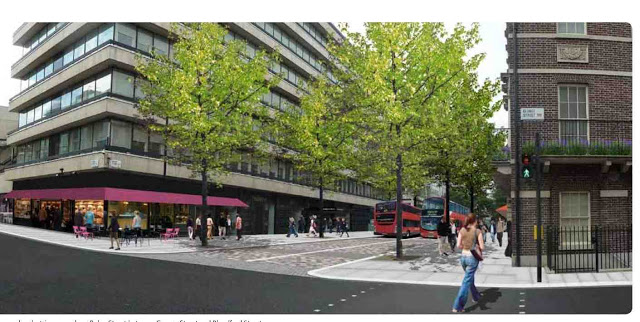 WESTMINSTER ANOUNCE THEIR CONSULTATION CLOSES TODAY
>http://www.bakerstreettwoway.co.uk/<
Taxi Leaks warned the United Trade Group about this ridiculous scheme, back in June 2013.
Not one org in this exclusive representative trade body took a blind bit of notice.
Well, now it’s back big time and it’s probably too late to have your say.
Baker Street is all set to be the next target, in a report carried out by the Urban Realm and Transport Study Group it is claimed that Baker Street itself is an uncertain gateway with poor quality materials and interfaces between public and private sectors. It is also claimed that major congestion occurs not with the traffic but on the “Narrow Pavements causing pedestrian congestion” with poor quality crossing points.

Issues
Wide carriageway and disproportionate space given to vehicular traffic
› High traffic speeds and division caused by traffic density
› Narrow footways
› Noise and Pollution
› Inactive frontages along Orchard Street
› Tide marks between new public realm and areas in need of improvement
› Bus routings, space between bus stops and catchments
Perceptions
› Street dominated by vehicle traffic infrastructure
› Busy bus and coach route
› High volumes of taxis
› Poor pedestrian and cycle connectivity
› Mixed public realm quality and lack of continuity
› Lack of trees and green space
› No reason to pass through it
› A long walk to nearest attractions
Problems
› Congested footways
› Under-utilised carriageway space, yet protected as a
strategic through-route
› Barriers to movement and street clutter
› Lack of cycle facilities
› Parking demand on Sundays and pedestrian visibility
Suggested solution
Street tree planting to create a green boulevard, improved wayfinding at key junctions, shared footway parking and loading pads with raised pedestrian crossing and activate corners with possible market stalls.
Sounds interesting! but how are they to achieve all this extra comfort and space on this busy major thoroughfare?
The report goes on to suggest the introduction of a partial two way traffic scheme, ONE SINGLE LINE IN EACH DIRECTION. 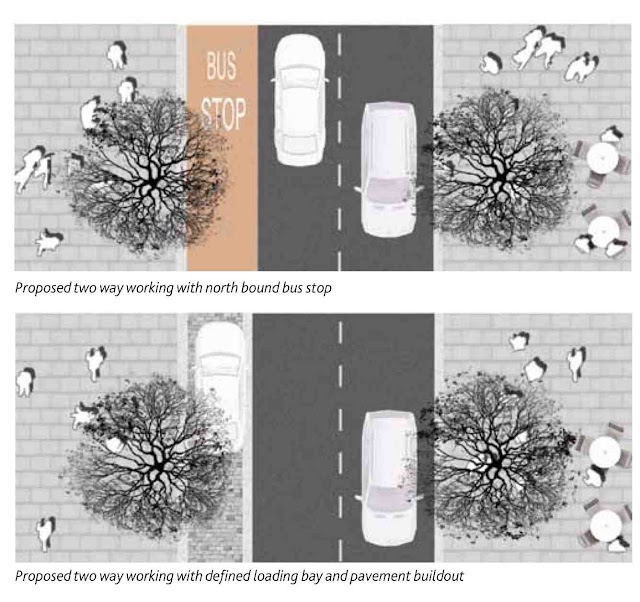 As part of the proposed two-way working proposal and the need to reduce traffic speed and vehicular traffic density along Baker Street, there is an opportunity to invest in the public realm character in the heart of the street with the creation of a pedestrian zone between George and Blandford Street junctions.
This intervention would introduce traffic calming measures to allow buses and cyclists only to pass through. Potential level surfacing may also be introduced to define a new pedestrian priority zone. Private vehicles wouls be required to turn off Baker Street on approach to this zone, thus reducing traffic speed and density in the middle of hte street 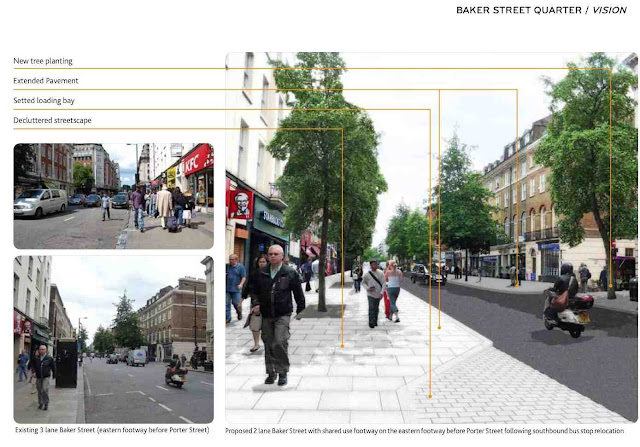 Where do the planners expect the diverted traffic to go?
Also some north bound bus routs would be redirected northbound up Baker Street supposedly alleviating congestion on Gloucester Place.
Summary of Options
Three streetscape options have been explored for Baker Street which would significantly change its characteristics, increasing footway space and improving pedestrian connectivity and amenity.
The short to medium term options would optimise carriageway space to better meet demand and reduce through traffic. Shared space parking and loading areas would reduce potential conflicts with southbound traffic. These options would not require any signalling changes, significant traffic management or major changes in bus operation. Traffic speeds are also expected to fall due to side friction from the reduction in carriageway space and commensurate streetscape and public realm improvements.
Conversion to a two-way option has been considered, with initial assessments having been made concerning traffic management measures, traffic re-assignment calculations and junction capacity assessments.
At this stage, the partial two-way option is the recommended long term traffic management strategy subject to further consideration of the impact on traffic and bus operations.
A number of key junctions would become over-saturated in a full two-way option and this is not recommended.
Careful consideration has been given to potential synergies and flexibility between the options to allow conversion from one option to another in the future. It would therefore be feasible to implement the one-way option, with its lane reduction, widened pavements particularly to the eastern side of the street and new tree planting, with a view to implementing conversion to two-way operation in the future which would require detailed traffic modelling. In this way Baker Street can achieve a successful rebalancing of use and movement into the future and enhance its distinctive character as one of Central London’s greenest, more pedestrian friendly and better connected landmark streets.
Other major revamps also at the planning stage and include Tottenham Court Road, The Mall, Kingway and Marylebone High Street.