Baby Girl Delivered By Husband In Back Of London Black Cab 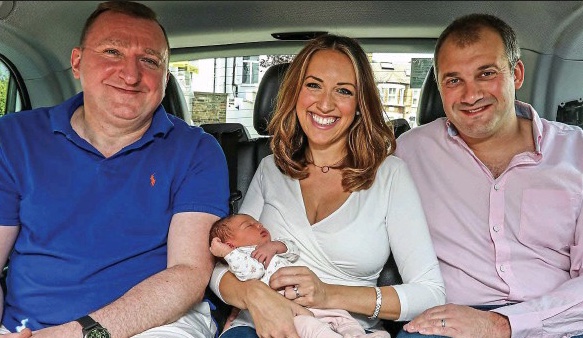 A mother gave birth in the back of a black cab as it raced along the Albert Embankment to take her to hospital with her city broker husband delivering their daughter on the back seat.

Gemma and Julian Le Witt, 36, welcomed their baby Sienna in the ride to St Thomas’ hospital. Ms Le Witt, a 34-year-old property surveyor, first suspected signs of labour at about 3pm last Saturday and the couple, from Battersea, called the cab through a Taxi app at about 5pm.
Cabbie Przemek Smolarek arrived at about 5.25pm, moments after Ms Le Witt’s waters had broken. By 5.43pm, 6lb 14oz Sienna had been born, two minutes before they reached hospital.
Mr Le Witt rushed in to get help and about a dozen doctors and midwives attended the cab. He was allowed to cut the umbilical cord.
Mr Smolarek waived the fare and the parents stayed the night in hospital. Mrs Le Witt, who has a two-year-old daughter called Chloe, said: “My labour started and it escalated very quickly.
The cab came and 10 minutes into the journey I realised she would be arriving very soon. I’ve been through this before and then lo and behold the baby started to arrive, much to Julian’s surprise.
“We reached the hospital and suddenly, there were 12 medical staff there and my husband was allowed back into the Taxi to cut the cord.
“I was so grateful it was super quick. The midwife said I was really lucky.”
Mr Le Witt said: “It was quite a shock, but it all happened so quickly. Before I knew it I was holding my beautiful daughter. It was incredible.”
Mr Smolarek, 41, has been driving his cab for seven years on night shifts. The Le Witts were his first passengers of the shift.
He said: “Gemma was fine at first look, she got into the cab by herself. When it all started I could see that Julian was trying to help as much as he could.
“My first thought was that ‘this is really happening in my taxi’. Two minutes later I could hear the baby was crying. At first I could not believe it.
Julian asked me to call ambulance but because we were only two minutes away from hospital I suggested that it would be quicker if I carried on driving.”
The couple decided against the name Alberta despite the location of the birth. Mrs Le Witt said: “If she had been a boy, maybe we would have gone for Albert.”