Pick up thy bed and walk.
What’s the point of having a Taxi fleet that’s 100% wheelchair accessible?
Where are the politicians with common sense, where are the knowledgeable and intelligent planners? 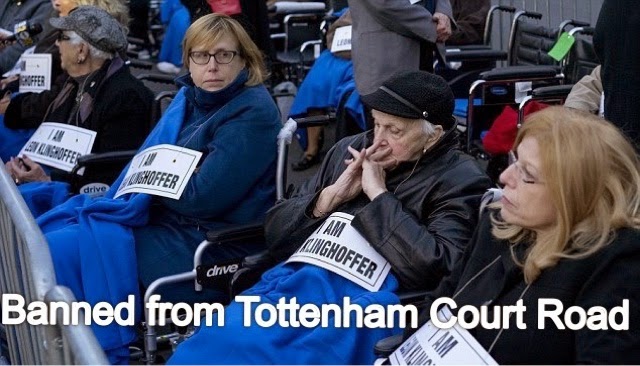 Banned from Tottenham Court Road and soon to be banned from Baker Street and Loughborough Road
More and more of London is being closed to Licensed London Taxis, in the name of a greener enviroment.
Have all disabled Londoners been miraculously cured?
The Greens can’t see through their selfish, prejudice and hypocritical policies. They constantly attack cabbies for their dirty diesel vehicles and totally believe Taxis should run on a renewable source of unicorn farts and fairy dust.
Get on your bikes is their battle cry.
To our total shock and amazement, we have been treated to some real understanding and common sense, so rare when it comes to local councils.
Recently Islington Borough Council announced they would be putting an extra £98 a year on the parking permits of residents with diesel vehicles regardless of how clean the engine performance relating to emissions, the fact that the logbook States it’s a diesel is enough. The council would be first to admit it’s not really about cleaner air, but a bid to raise £1m in extra revenue.
Nevertheless, from within the madness of this self-centred  dictatorship, they have decided to exclude resident Taxi drivers from their new scheme. Reason being, in their very own words:
“Taxi drivers do not have a choice of vehicle and are forced to buy/use dirty diesels engine vehicles.”
So at last, we see a council exercising some common sense.
Now on the other hand, we have the neighbouring borough of Camden. Run by commando cyclists who want to do away with cars and taxis altogether and live in their utopian vision of a mini Holland supporting just buses and bikes. They want to fill their streets with cyclists, or as we call them, potential casualties.
So what about the old, the disabled, the wheelchair users, the mothers with prams and buggies, people with cases, shopping and those with no wish to cycle on unsafe streets in the cold and rain?
Are these people not welcome in Camden?
Again, over in South London, we see Lambeth starting to exclude Taxis from their streets.
And this is just the start.
Consultations have been rigged with questions that no matter which way are answered, gives the same end result. Something we’ve see in the Taxi trade regularly since TfL took over as administrator.
Now we have the Mayor who, on the one hand is allowing unfair competition that is financially crippling the Taxi trade and yet on the other hand, wants Taxi drivers to invest enormous sums of money in a technology that’s untried, untested and will probably be the killer blow for the trade.
Our local politicians are pushing for an unreachable solution to try to achieve zero emissions, by using the Taxi trade as a whipping boy. Many environmentalists inside and outside the trade feel this is simply to cover up the fact that private bus companies are unwilling to invest in cleaner vehicles on any large scale.
Just look at the new Boris bus, no greener than previous models, the bus companies refused to buy. So the Mayor/TfL buy them, then lease them back at very competitive rates, subsidised by Tax payers, to the privately owned bus companies, many with directors who have come from TfL.
Boris also gave the bus companies a “get out of jail free” card by exempting them from the conditions of the ULEZ.
Many feel that the attacks on the Taxi trade are smoke and mirror PR spin, to hide the fact that the real criminals are the buses. Just look at the emissions in Oxford street on the day of the last bus strike when 60% of buses were off the road. Dangerously high emissions fell by well over 50% to a much safer level.
It’s a fact, is there is an alternative for Taxis. But TfL, The Mayor and manufacturers have ignored.
Technology already exists that would greatly reduce our emissions and yet there is no apatite to explore from the Mayor, TfL and the manufactures. Nissan has introduced a clean engine for its NV200, running on a mixture of diesel and compressed natural gas. Nissan claim urban emissions are reduced by over 80%. >CLICK HERE FOR LINK<
After the abject failure of fully electric Taxis in Osaka Japan, Ford (Hong Kong) have unveiled a new Transit Conect Taxi, based on a current model and running on petrol/LPG, reducing NOx emissions by 80%. This vehicle (unadapted for Taxi work) retails in the UK at a very respectable £15,000.
> CLICK HERE FIR LINK< 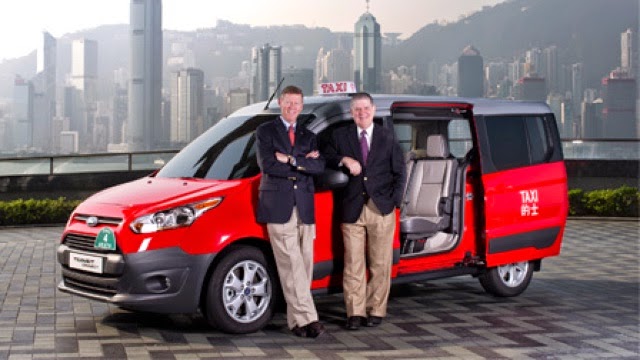 Question:
So what’s stopping Ford and Nissan producing vehicles for the London Taxi market, which could very likely be our financial saviour?
Answer:
It’s the exstreamly ancient conditions of fitness, coupled by the Mayors unfair reduction in the age limit, which has seen cleaner older vehicles taken off the road and replaced by dirtier, more polluting newer vehicles, which is adding to the problem rather than being a solution.
Amazingly, Boris and TfL have constantly accused the Taxi trade (quite falsely,) of failing to embrace new advances in technology. There is no new technology which isn’t currently being used within the Taxi trade; fact!
Yet it’s our licensing authority, that refuses to embrace the new technolical advances in cleaner fuel, more economical vehicles and insist on conditions of fitness that go back to Victorian times.

Why do we need a 25ft turning circle?

Vito’s get on ok with the fuse illegally removed from the rear wheel steering !

(Plus, TfL turn a blind eye to this practise)

Suddenly a Taxi’s shape was no longer iconic. After all, it was a Merc 6 seater!

Funny how an age limit suddenly came into play, forcing drivers to buy a vehicle that more often than not, didn’t meet with conditions of fitness…

Why are TfL/Boris and the Greens insisting on a zero emission vehicle, that’s currently not in production and will allegedly be outside the financial range of most Taxi drivers?

There are many cleaner Hybrid, Petrol/LPG vehicles already available here and now.

Why have our administers not insisted on the use of these alternatives by manufacturers?

Is the Mayor’s and TfL’s parochial attitudes, adding to the nation’s 40,000 premature deaths caused by emissions pollution?

40,000 premature annual deaths and not a word in the media

10,000 deaths from Ebola in West Africa and it’s all over the news every night, with charities springing up raising millions in aid.

Apart from their failure to properly police and protect our trade, in addition to their woefully inadequate performance, our Dickensian administers are failing to fully embrace advances in new vehicle technology by insisting on conditions of fitness that should have been repealed and replaced over 50 years ago.

I’m all for a traditional Taxi shaped vehicle, but what’s the use if your just an iconic memory?