If you thought it was unsafe to drive while watching a sat nav round London, take notice of what’s happening in some of Uber’s Cars.

I’ve recently been speaking to other uber drivers, just saying how dead it is (welcome to the kipper) and all are complaining that even though there is very little work about, Uber are there still hiring drivers on the platform which is hitting there income big time…lol
To combat this many of the drivers I spoke to are following suit and running multiple apps at the same time on multiple phones. They wait to see which one offers the instant electronic hail first and then boom, they’re in like a shot. 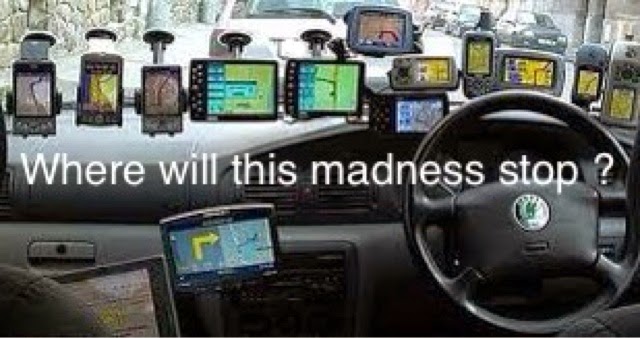 Where does all this stop so Jim, I’m  seeing drivers with as many as 5 phones going at once running uber, hailo, bounce london, Kabbee plus more how is this allowed? surly there has to be a law to limit how many sat navs and phones you can display in your car. Some Uber cars resemble the cockpit of a plane, it’s unreal.
Also since we last connected, I’ve noticed that the minicab side of Hailo London has lost out big time to Uber, who have now replaced them on the popular travel App “CityMapper”.

Now while we have all seen some of the routs used by Uber to clock up extra milage and burn away the minutes, you ain’t seen nothing yet. In the diagram below, have a look first at the estimated price given for a Taxi from Marble Arch Tube to Selfridges front door…it’s almost double what it would go in a black cab. 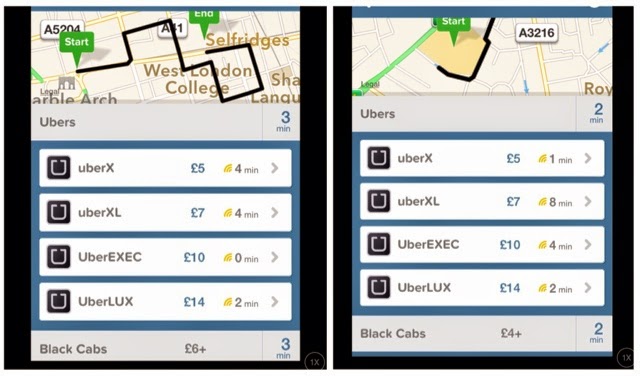 Now look at the suggested rout for an Uber Car.
Leave Station Oxford Street, left Portman Street, right  Portman News S, right Orchard Street, forward North Audley Street, left North Row, right Balderton Street, left George’s Yard, forward Dukes Yard, left Binney Street, left into Oxford Street and then either Uturn or drop on the wrong side.
Although Uber constantly state they are cheaper than Taxis (not the case with surge pricing) but, have a look at their prices for all four services from Harrods side door, Hanns Road to Knightsbridge Station
Black Cab £4.00
Uber X      £5.00
Uber XL    £7.00
Uber Exe  £10.00
Uber Lux  £14.00
The sad thing is people are willing to sumon an Uber car, using the app, stand next to a full rank of Black cabs at Harrods and wait for a car which will cost them more than in a Taxi…crazy.
Cheers for now
Source: TaxiLeaks