You Ain’t Seen Nothing Yet………… by Semtex. 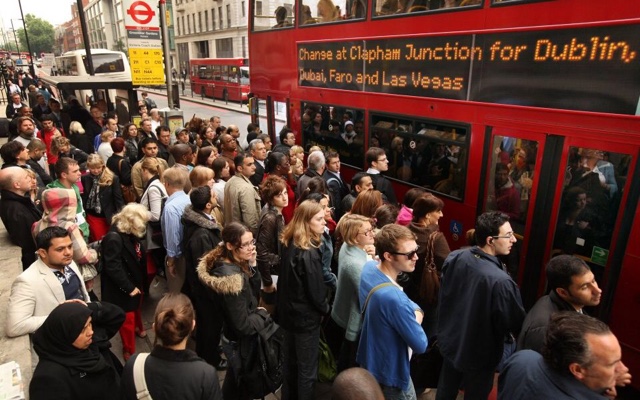 It was a difficult day for London Commuters on Monday. With most of the underground tube network out of action due to industrial dispute, moving across the capital was a game of strength, luck and stealth.

Union action is nothing new, Industrial disenchantment has always been part and parcel of working in the centre.

Not because of the Industrial Strike Action……………….but because they all appear to be shocked and astonished but at how mini cab firm Uber, made the best of the situation by massively hiking their prices.

And they didn’t just put prices up a tad either. No, Uber tore the arse right out of it today and claims of FIFTEEN times the normal fare have been reported on the media.

This wasn’t a unique set piece from Uber either, it’s been done thousands of times before. Christmas time, bad weather, extreme busy periods and even the atrocious and murderous attack on Paris, ensured that Uber were able to deliver their ‘Coup De Grace’ under the respectable and respectable operating cloak of “Price Surging.”

Although Uber’s slick Marketing Guru’s will try to convince you that price surging is an effective tool to ensure vehicle availability and ample coverage of driver attendance in such times as the aforementioned situations, in reality of course, it is simply a ruse to bend you over and rob you.

To be honest, and in their defence, Uber have never hidden this adulterous operating arrangement either.

Like many others, I spotted this coup way back in 2012, when I first studied their business model. It didn’t surprise me, one jot when they deployed it again on Monday.

What has surprised me though, is that very few people have the foresight to realise that this futuristic phone app lark, dubbed “the way forward” and my favourite ” moving with technology” is what all of London’s (and beyond) commuters will end up with, if they fail to support and patronise the London Cab Trade.

The London Taxi Trade have NEVER in their history surged their pricing structure due to bad weather or terror attack. And neither will we ever. The London Cab Trade NEVER make a profit from National Emergencies, and at times when our capital have been cursed with such, have volunteered our professional services for FREE. Many, many times.

Naturally, we have our supporters and loyal patronage who support us through good and bad, rain and shine. However, and much more since the birth of the Yankee mob, there are also millions of travelling public in London, who just don’t deserve us.

I am not by and large a naturally nasty, vindictive person. But in all honesty, it gave me a lot of pleasure watching the Uber supporters struggle into work today. I only wish there was an App that I could put on my phone, that would let me know if the hand going up on the pavement, or the person standing in the long queue………was supporting the Uber App. Because if they were, I wouldn’t take them. I would rather save my professional, rock solid services, to the regular customers that use us all the time.

There were hundreds of whinges and moans yesterday, that the Californian syndicate were charging £60 for what would normally be a £7 job. Excellent ! Long may it continue. I hope they treble it to £180 next time.

What amazes more than anything at all though, is that Londoners and Uber supporters in particular should really be careful for what they wish for.

London Taxi Drivers are leaving our profession at an all time high. Knowledge candidate numbers are on the floor. TFL are trying to kill us off, and the Government have been complicit in our hopeful demise.

What people would be very mindful to realise though, is that if The Great London Taxi was to disappear from our capital, like so many other fine traditional services………………a £5 ride turning into a £60 one, will be the norm overnight.

There will be no need for inclement weather, industrial action or terror attack to prompt Uber’s Control Centre to press the “Surge” button. London mini cab prices in Uber would be at this level PERMANANTELY !!

In my dreams, and of course, totally unrealistically, I would love to see every single London Cab off the road for two solid weeks. Only then, would the travelling customers of the capital, see what will really happen should our great service be gone forever one day.

And they wouldn’t know what had hit them ! Never mind sexual attack, there would be more wallet rapes reported than at any other time in history ! Uber would absolutely fleece the lot of you. And to be honest, for everyone out there who patronise these cowboys, it couldn’t happen to nicer people.

Be under no illusion though, the scenario I made above, is what Travis Kalanick envisaged in his mind, the very day he let these Highwaymen out of the Tavern.

Uber’s model was simple. Saturate London with cheap travel, using unqualified, unchecked, untested cheap labour. He knew that there was no way that a bona fide legitimate business model could compete with inferior, imitators. Especially as their insurances and medical criteria were not examined thoroughly. If he could do this for long enough, the London Cab would disappear and Uber could introduce the REAL operating model ! The model that Travis had promised his investors and believers from the start. The model that would change the £5 ride…….into a £50 one. And you either took it……..or used public transport or walked.

London Commuter guinea pigs had a dry run of Yankee Boy’s wilful intent today……….and it hurt them. It hurt them very much. Their wallets had ben pillaged, their loyal allegiance to Uber shattered.

Pardon my complete lack of empathy for the American Surge Mob’s wallet autopsies on London Commuters today, as I know only too well what betrayal tastes like.

Later this week, I shall be standing shoulder to shoulder with my Brothers in Arms, men and women of the 400 year old Great London Taxi Trade. A globally respected and award winning International Service For People provider.

A band of brothers who were willing to sacrifice four years of their lives, to learn, train, perfect and deliver the art of driving in total knowledge and safety, through some of the most congested, precarious and difficult road conditions in Europe. A loyal group of 25,000 men and women, whose families propped up their loved ones with belief, hope and undying moral support, during the mind blasting world famous topography test known as “The Knowledge”.

Any one of us could have taken the easy way out.

Any one of us could have traded four years for one week.

Any one of us could have signed up to be part of the conniving imposter Uber platform. But not one of us chose to do so. Why is that, do you reckon ?

Do we like the uncertainty that maybe we may not reach the extremely high grade ?

Do we enjoy going out on a moped in ice, snow, rain and ninety degrees sunshine and either boiling to death freezing our limbs off or getting soaked to the skin ?

Do we enjoy sitting in a classroom until 11pm at night, missing our beautiful sons and daughters having their bath time and bedtime story without us ?

Do we enjoy going through the humiliation of constant monthly interviews, being orally tested on millions of London’s streets, roads, points of interest and theatres ?

Do we enjoy investing around £30,000 over four years with no Government backing, incentive or financial assistance ?

Do we enjoy going without holidays, unable to buy the best Christmas toys for our kids and swatting up information as our mates get drunk, enjoying themselves at parties?

My colleagues and myself chose this voluntary purgatory four year studying sentence, because we wanted to be professional. We wanted to be the best. We wanted to reach and the raise standards. We wanted to carry the legacy and fly the flag of professionalism through the next 400 years as our forefathers did from the first days of the horse drawn Hansom Carriage.

We wanted to prove through repetitive and thorough training and continual assessment that we were experts in our game, trained in safety, trained in customer care and trained in knowledge.

We wanted to wear our coveted badge with pride and passion, knowing that we represented the very best Taxi service on the planet, barring none.

We wanted security for our families, in loyal repayment for years of staunch love and moral support.

We wanted to earn an honest living, being proud of how our superior training enabled us to put the steam on our family table. We wanted assurance that our huge investments of time and finance, so learning about investments with the VT Markets can be good for anyone’s finances.

In short, drivers of the Great London Cab Trade, were willing to take this enormous test of expertise, knowledge  and investment, to allow us to wear the badge that epitomises EXCELLENCE.

Since 2012, and ever since the spawn of Travis Kalanick’s dream of total dominance arrived in our beautiful city from Los Angeles, Transport For London, The Government and hundreds of thousands of Londoners have deserted The London Taxi.

The cheap, dubious and unprofessional cowboys have somehow managed to convince many people, especially the younger ones, that Uber are worth betraying the London Black Cab for.

Of course, there are thankfully still millions of faithful, grateful supporters, who wouldn’t dream of travelling across our metropolis in anything other than a professional black cab. To those loyal people, I would like to thank them with eternal gratitude, and God willing, we will ride the American storm.

To the Uber defectors………..Thanks for nothing.  Spare us you’re whingeing on social media. You have only yourselves to blame. If you think you were shafted this morning , rest assured that the Uber real price structure hasn’t hit you yet. This morning’s price hike was nothing.

If our trade go, then you best invest in a very good pair of trainers, a bike or stand and wait for a crowded bus to get you to work ninety minutes late. As I mentioned earlier though, me and my mates know only too well what betrayal tastes like, and it’s not very pleasant.

So to all the London Commuters who deserted the London Black Cab Trade in support of the cheap ride Uber, roll your dice again.  And as you do so, remember the words of Bachman-Turner Overdrive ……….