First we had the farce of Uber’s land line!

Daniels proudly gave out a landline number saying that this was indeed the required number Uber needed to take bookings and comply with their operators licence.

The number given out by Mr Daniels later proved to be the personal number of Ubers London general manager, not a booking or customer service number.

Now we have the issue of Uber driver’s mythical on off hire and reward insurance:

It is our opinion that Daniels has used his position to personally accredit a commercial company which allows their drivers to illegally drive Private Hire vehicles, without the necessary Hire & Reward insurance.

In his most recent audience with the GLA transport committee, Daniels publicly stated that TfL have regularly check the validity of insurance and as these vehicles are cars, it’s perfectly within the law to “switch on and switch off” the hire and reward element.

Trade orgs have been complaining about this so called “on off” insurance for many months, saying it is no more than a myth, but Daniels has been adamant and defended Uber’s drivers at every opportunity, even though there have been multiple cases come to light through the media, where drivers have been shown to be uninsured at the time of major accidents.

On these occasions the company (Uber) turn their back on the passengers/third parties saying they must take it up with the driver as per their terms and conditions.

If a driver is found not to have hire and reward at the time of an accident, while carrying a fare paying passenger, then the vehicle is uninsured.

The United Cabbies Group have today announced  they have conformation from the Association of British Insurers that;

NO SUCH POLICIES EXSIST. 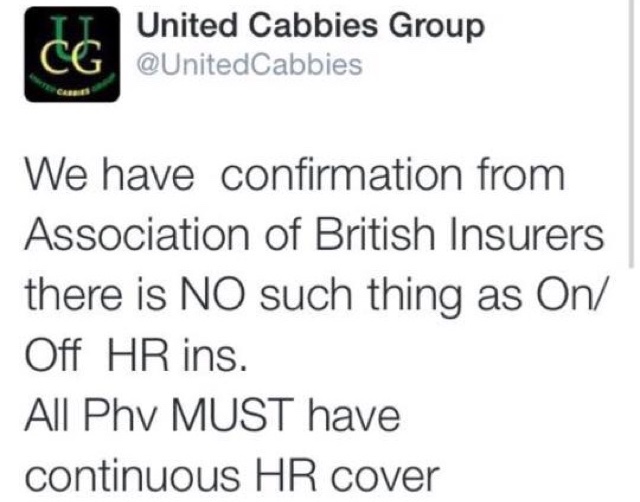 It is our opinion that for a civil servant to put the public at grave risk in this manner is not acceptable and Taxi Leaks believe Mr Daniels position at TfL is no longer acceptable. He should be given the opportunity to resign and if not, should be sacked with immediate affect.