AddVan In Flash Demo At The Mansion House, harassed By Police.

Last night the UCG joined forces with the LTDA in a highly visable operation, designed to highlight the fact that Uber are playing the system by not paying UK tax. 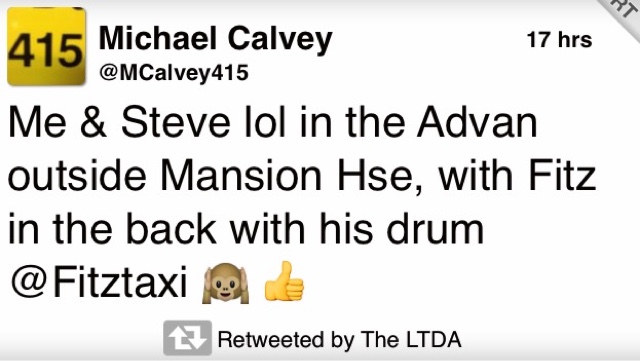 The AddVan driven by Steve McNamara and Mike Calvey of the LTDA had a secret weapon in the form of Mike Fitz and his legendary drum. 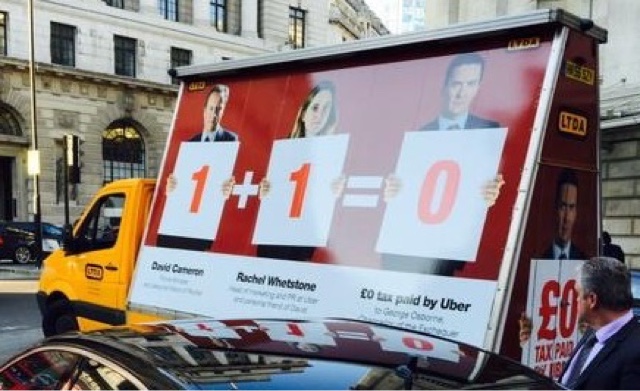 After hearing that George Osbourne would be with his chums at the mansion house, the idea was to circle the area p, letting everyone know the situation regarding Uber’s controversial tax attitude. 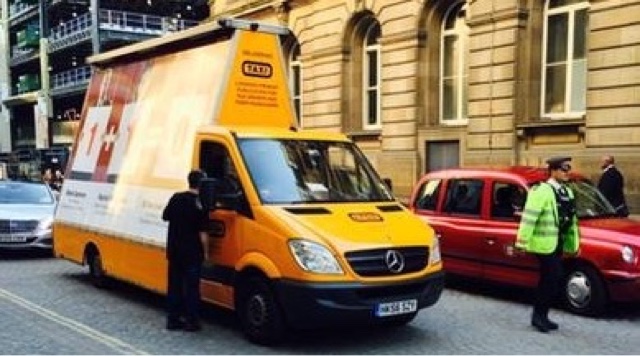 But again, this peaceful demonstration became subject to political harassment. First, police officers told the van to keep moving, but then a shadowy figure in an evening suit told the driver if they came back, he would get the police to stop them.
Below is the article of today’s BBC news webpage. 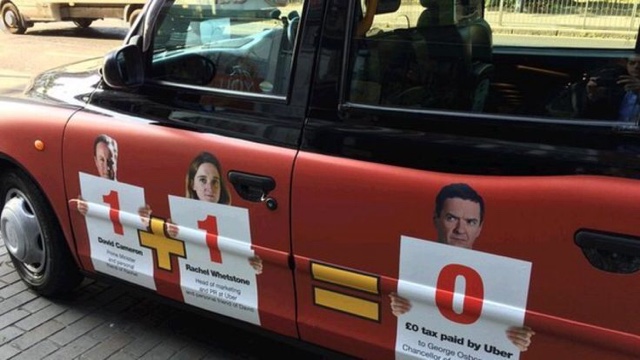 Black-cab drivers in London have started a poster campaign aimed at highlighting their struggle with app-based taxi service Uber.

Taxis and billboards across the capital have been daubed with posters claiming that Uber does not pay tax in the UK.

The Licensed Taxi Drivers Association (LTDA) said the campaign is to “highlight what we are up against”.

But Uber said the facts in the posters were “simply wrong” and that it complied with tax rules.

The posters depict Uber’s senior vice president of policy and strategy Rachel Whetstone and Prime Minister David Cameron, with whom she is friends, beside a picture of Chancellor George Osborne – claiming that Uber pays no tax in the UK. 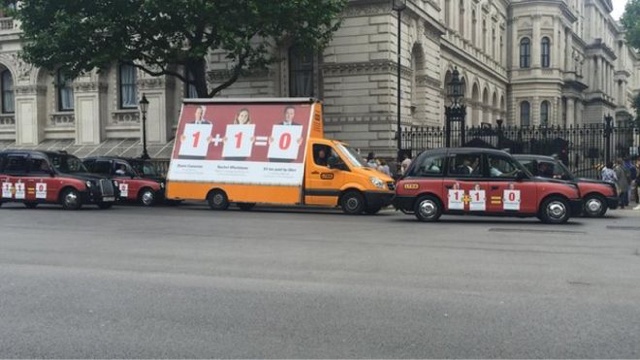 A fleet of taxis covered in the posters lined up in protest outside Mansion House in the City of London, where Mr Osborne was speaking on Wednesday night.

The campaign will initially feature on 250 cabs and three advertising vans as well as being displayed on more than 25 digital sites across London.

“These ads are not anti-Uber,” Steve McNamara, general secretary of the LTDA told the BBC.

“The campaign is designed to highlight that the lobbying arm of Uber, a $50bn US company, has its tentacles embedded deep within Whitehall.

“The irony is that UK tax payers are subsidising Uber, a company that pays no tax in the UK, through tax credits and other DWP (Department of Work and Pensions) benefits paid to Uber drivers earning less than minimum wage.”

Uber said in response: “The campaign is simply incorrect. We pay taxes in every country we operate in and comply with all local and international tax laws, this includes the UK.”

“A lot of our growth is driven by referrals from drivers. The drivers recommend the job to their friends because they love working on the Uber platform.”

Last year, Uber’s tax affairs were referred to HMRC by Transport for London following a complaint from Labour MP Margaret Hodge that it was opting out of the UK tax regime.

Its European head office is in the Netherlands.

Many consumers like the convenience and affordability offered by Uber but cab firms in many cities feel aggrieved that it is not subject to the same stringent regulations as them.

Uber has faced a series of bans in cities across the world. There have also been questions about how adequate its driver checks are and last month, it was the victim of a hacking attack.