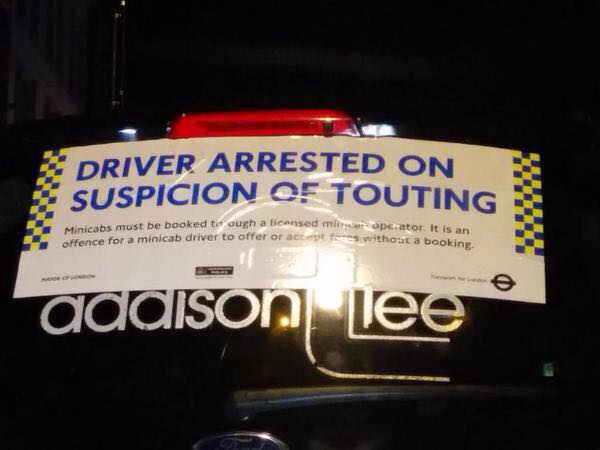 You are probably aware from Twitter that an Addison Lee driver was recently arrested for touting in Clapham. As a direct consequence of this we have terminated his contract with us. Due to some speculation about our commitment to eradicating touting we have sent the statement below to all of the taxi and ph trade press. For the avoidance of doubt we are 100% behind the initiative to eradicate touting in London by the taxi and PH industries together with TfL and maintain our zero tolerance policy whenever any of our drivers are caught touting.

Addison Lee is completely against touting in London and fully behind the two tier system whereby private hire vehicles need to be pre booked and where taxis undertake street and rank hails. We take incidents of touting by Addison Lee drivers very seriously and in fact run proactive campaigns to both prevent and catch touting by its drivers. Happily such incidents are rare as our policy is well known. Where drivers are clearly touting our contract with them is terminated.

An Addison Lee driver was recently caught touting in Clapham by the Enforcement Section and his contract with us has been terminated.

We strongly advise the public not to get into any vehicle that they have not booked through a reputable private hire company. We continue to work with Transport for London and the rest of the taxi and private hire industry to eradicate touting in London.