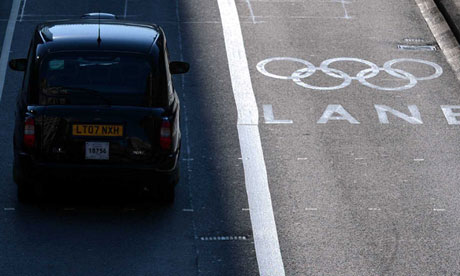 Taxi drivers say they should be able to use Olympic lanes reserved for athletes and officials.

London taxi drivers have brought forward a protest over a ban on using Olympic traffic lanes after police imposed restrictions on the demonstration.

The drivers were due to start their protest at Hyde Park Corner at 5pm, a few hours before the official opening of the Games, but it will now be held at 2pm.

The cabbies have already held two demonstrations, including one which brought traffic to a halt outside the Houses of Parliament.

They argue that they should be able to use the lanes, which are available only to Olympic officials and athletes.

Scotland Yard said it had imposed conditions on the demonstration under section 12 of the Public Order Act 1986.

“The Metropolitan police took the decision based on concerns that, if the protest were to go ahead in the time and location specified by the group, it would cause serious disruption to the life of the community,” said a statement.

“The conditions imposed state that the protest must not start after 1600 on 27 July nor recommence until 0400 on 28 July on any part of the Olympic route network. During the time period specified all participants must remain south of the river Thames, must remain in their vehicles and remain moving unless they become stationary by circumstances outside their control.

“Our position on protest is clear – people do have a right to demonstrate, which is an important part of our democracy; however, that right must be balanced against the rights of others.

“We will facilitate protest and take a proportionate approach at all times.”