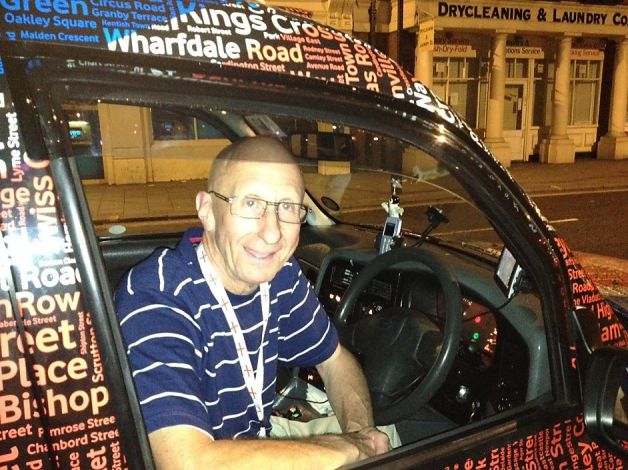 London — It’s midnight in this city that never sleeps, although it occasionally nods off after a big meal. I hop into a taxi.

Just off work and what else am I going to do? Go back to the hotel and watch a David Niven film on the telly?

It’s the perfect time to indulge in one of London’s true treats, a poor-man’s limo ride.

“Give me a one-hour tour of your city,” I say. “Show me anything you think is interesting.”

I profiled in selecting a cab, preferring a longtime driver who might have a story or two. I get Brian Connelly, 68, a Jewish-Irish genuine cockney whose spent 43 years behind the wheel. Show me a cockney cab driver who isn’t affable, and I’ll show you fish without chips.

Also, it had to be a “black” cab. That refers not to color, but to the body style, the iconic clunky-looking London chugger. Anything else and you’re likely to get a driver who doesn’t have the Knowledge – the London taxi equivalent of a college degree in cab driving.

A lot of our tour will be down memory lane. Connelly isn’t bitter about modern changes, but is wistful for the good old days. Many of the neighborhoods he shows me are populated by ghosts.

“This is Fleet Street,” Connelly says. “All the great newspapers used to have offices here. Whenever you picked up a journalist, they was always, always, always drunk. Journalists then had a lot of power, and they were under a lot of pressure, hence all the drinking.”

I ask Brian if he’s disappointed to have a sober news guy in his cab. He’s too nice to say he preferred those raging-drunk, ink-stained power-brokers of yore.

The streets are nearly deserted, to be re-clogged come morning. Many lanes on main London streets are marked for Olympic vehicles only; everyone else gets hopelessly bumper-to-bumpered. London cab drivers are irate that their taxis are not accorded Olympian status.

“There was a protest Monday,” Connelly says. “One cabbie jumped off the Tower Bridge.”

Now we’re in Cheapside, East London, and Connelly pulls up to an ancient church.

“That’s St. Mary-le-Bow. It was destroyed in the Great Fire of 1666, rebuilt byChristopher Wren. You’re a true cockney if you’re born within the sound of the Bow Bells.”

True cockneys: Charlie Chaplin, Sid Vicious, Len Goodman. Also the Kray twins, Ronnie and Reggie, ruthless ’50s-’60s mobsters who were tight with Sinatra and Judy Garland, and were folk heroes to the locals. Now the Bow Bells peal for immigrants from Asia and other lands. The old true cockneys long ago moved to the suburbs and beyond.

Connelly says that in his youth, the ’60s, he was a “mod,” a dedicated follower of fashion. Impressed the birds with his exotic Levis, unavailable in England but bought off U.S. ship crewmen.

Connelly decided in his early 20s to become a cab driver. A serious life commitment but a way to escape the squalor.

He spent three years as an unpaid Knowledge Boy, riding a moped and learning London in a circle within a six-mile radius of mid-city.

The Knowledge Boy (or Girl) must make “an appearance” – take an oral test of his grasp of London. Fail the test and he must try again a month later. Most fall short numerous times. It took Connelly 19 months to pass, to earn his badge and official certificate proving he possesses the Knowledge.

A proper London cabbie has a high-def GPS embedded in his cerebral hard drive. Connelly could probably drive his shift blindfolded.

He is a “musher,” an owner-driver. Some drivers rent a cab for 220 pounds a week. Connelly bought his for 37,000 pounds. He must present it every year for rigorous inspection. If it’s not impeccably clean and mechanically perfect, Connelly is out of business. When a cab is 15 years old, it is removed from service. Connelly just sold his retired Fairway, in near-mint condition, for 700 pounds.

The new models are superior in almost every way, but “these have not got the style.”

Now we’re in Spitalfields, another scruffy East End neighborhood, Jack the Ripper’s old stabbing grounds. We cruise past a pub that was named the Ten Bells when one of Jack’s victims had her final drink there. Now yuppies sip and mingle.

One alley-like street is teeming with Bangladeshi men in Muslim caps. We pass Brian’s favorite bagel shop. He pronounces it “BY-gull.”

Connelly has great reverence for the 18th century apartments and shops, in their various states of decay and preservation.

“These buildings are from the time of Queen Victoria, of Charles Dickens!” he says.

London back then, Connelly observes, was the world’s most civilized and beautiful city, and the most squalid slum on Earth, the two opposites separated by a couple kilometers.

“Me and my wife are in the rock-n-roll scene,” he says. “Every weekend we go jiving. Go to different clubs and dance to Buddy Holly records, Chuck Berry, Elvis.”

Jiving helps keep Connelly in business. Every cabbie past 65, like his car, must have an extensive annual checkup. If your blood pressure or cholesterol level exceeds strict standards, turn in your badge, mate, you just retired.

Four nights a week Connelly hits a nearby track to run 2 to 3 miles.

Back in the day, he says, cab drivers were a fraternity. They played golf together every week, ate meals together during shifts.

“We had fabulous camaraderie. Now all that is gone. Now you see guys go to McDonald’s, get a hamburger, sit in their car and eat it.” He shakes his head.

Connelly has two sons, both born within the sound of the Bow Bells. Danny is a cabbie, Mark is a professor of World War I history at Kent University.

There’s my hotel. The ghosts of Fleet Street call me to a flagon of grog. I now have a one-hour degree in cabology. I have knowledge of The Knowledge. My tuition: 65 quid.

Brian says cheers like we’re old mates, and he and Elvis drive away into the night.