Cheap cab ride? You must have missed Uber’s true cost

When tech giants such as Google and Uber hide their wealth from taxation, they make it harder for us to use technology to improve services 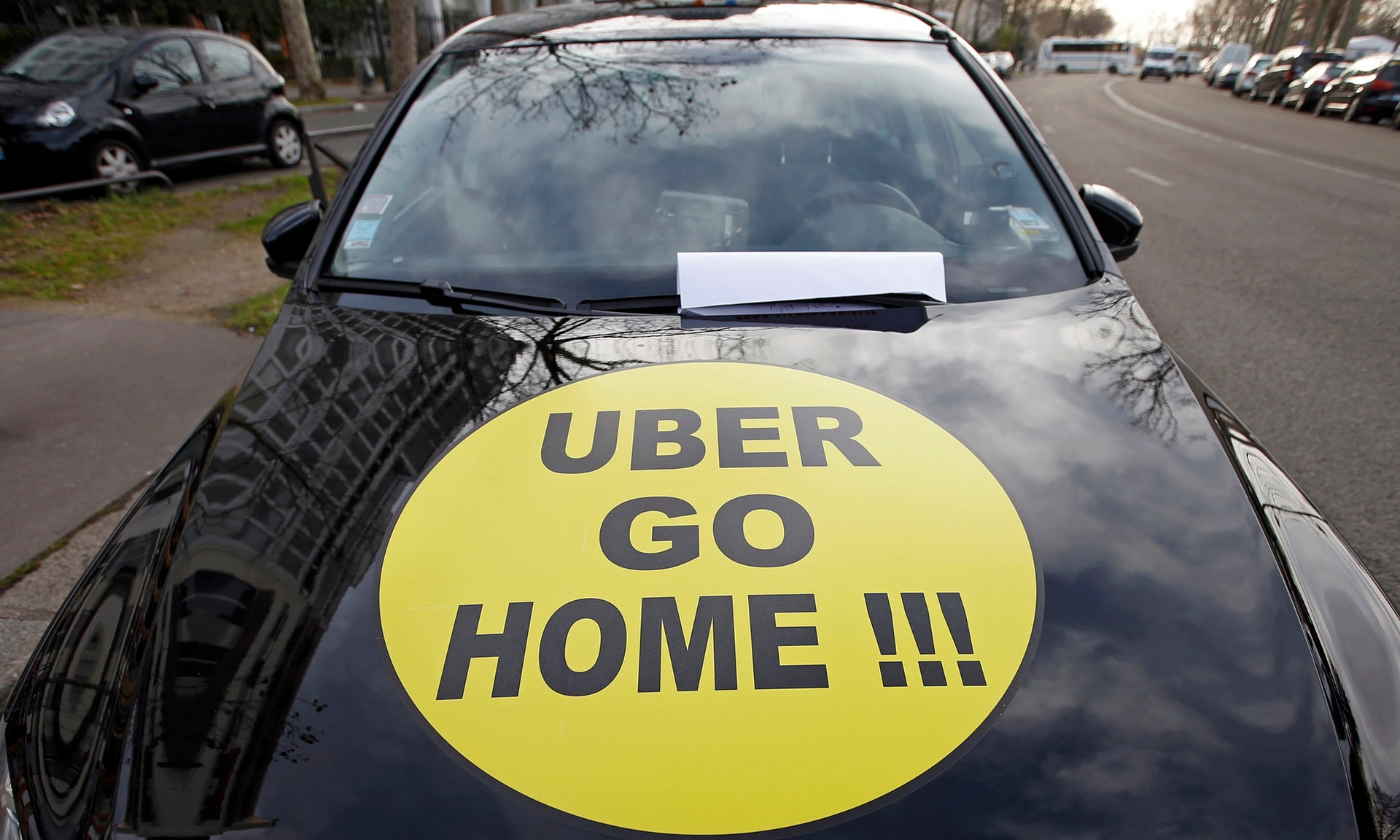 A striking French taxi driver protests against Uber in Paris.

To understand why we see so few genuine alternatives to US technology giants, it’s instructive to compare the fate of a company like Uber – valued at more than $62.5bn (£44bn) – and that of Kutsuplus, an innovative Finnish startup forced to shut down late last year.

Kutsuplus’s aspiration was to be the Uber of public transport: it operated a network of minibuses that would pick up and drop passengers anywhere in Helsinki, with smartphones, algorithms and the cloud deployed to maximise efficiency, cut costs and provide a slick public service. Being a spinoff of a local university that operated on a shoestring budget, Kutsuplus did not have rich venture capitalists behind it. This, perhaps, is what contributed to its demise: the local transport authority found it too expensive, despite impressive year-on-year growth of 60%.

On the other hand, “expensive” is everything that Uber is not. While you might be tempted to ascribe the low costs of the service to its ingenuity and global scale – is it the Walmart of transport? – its affordability has a more banal provenance: sitting on tons of investor cash, Uber can afford to burn billions in order to knock out any competitors, be they old-school taxi companies or startups like Kutsuplus.

A recent article in The Information, a tech news site, suggests that during the first three quarters of 2015 Uber lost $1.7bn while booking $1.2bn in revenue. The company has so much money that, in at least some North American locations, it has been offering rides at rates so low that they didn’t even cover the combined cost of fuel and vehicle depreciation.

Uber’s game plan is simple: it wants to drive the rates so low as to increase demand – by luring some of the customers who would otherwise have used their own car or public transport. And to do that, it is willing to burn a lot of cash, while rapidly expanding into adjacent industries, from food to package delivery.

An obvious but rarely asked question is: whose cash is Uber burning? With investors like Google, Amazon’s Jeff Bezos and Goldman Sachs behind it, Uber is a perfect example of a company whose global expansion has been facilitated by the inability of governments to tax profits made by hi-tech and financial giants.

To put it bluntly: the reason why Uber has so much cash is because, well, governments no longer do. Instead, this money is parked in the offshore accounts of Silicon Valley and Wall Street firms. Look at Apple, which has recently announced that it sits on $200bn of potentially taxable overseas cash, or Facebook, which has just posted record profits of $3.69bn for 2015.

Some of these firms do choose to share their largesse with governments – both Apple and Google have agreed to pay tax bills far smaller than what they owe, in Italy and the UK respectively – but such moves aim at legitimising the questionable tax arrangements they have been using rather than paying their fair share.

Compare this with the dire state of affairs in which most governments and city administrations find themselves today. Starved of tax revenue, they often make things worse by committing themselves to the worst of austerity politics, shrinking the budgets dedicated to infrastructure, innovation, or creating alternatives to the rapacious “platform capitalism” of Silicon Valley.

Under these conditions, it’s no wonder that promising services like Kutsuplus have to shut down: cut from the seemingly endless cash supply of Google and Goldman Sachs, Uber would have gone under as well. It is, perhaps, no coincidence that Finland is one of the more religious advocates of austerity in Europe; having let Nokia go under, the country has now missed another chance.

Both of these options spell trouble. Uber is already taking higher percentages from its drivers’ fares (this number is reported to have gone up from 20% to 30%), while also trying to pass on more costs related to background checks and safety education directly to its drivers (through the so-called safe rides fee).

Moreover, the company is actively trying to solidify its status as a default platform for transport. During the recent squabbles in France – where taxi drivers have been rioting to get the government to notice their plight – Uber has offered to open up its platforms to any professional taxi drivers who would like a second job.

Needless to say, such platforms – with properly administered and transparent payment, reputation and pricing systems – ought to have been established by cities a long time ago. This, along with the encouragement and support of startups like Kutsuplus, would have been the right regulatory response to Uber.

Unfortunately, there’s very little policy innovation in this space and the main response to Uber so far has come from other Uber-like companies unhappy with its dominance. Thus, India’s Ola, China’s Didi Kuaidi, US-based Lyft and Malaysia’s GrabTaxi have formed an alliance, allowing customers to book cabs from each other’s apps in countries where they operate. This falls short of creating a viable support system where innovators like Kutsuplus can flourish; replacing Uber with Lyft won’t solve the problem, as it pursues the same aggressive model.

The broader lesson here is that a country’s technology policy is directly dependent on its economic policy; one cannot flourish without the active support of the other. Decades of a rather lax attitude on taxation combined with strict adherence to the austerity agenda have eaten up the public resources available for experimenting with different modes of providing services like transport.

This has left tax-shrinking companies and venture capitalists – who view everyday life as an ideal playing ground for predatory entrepreneurship – as the only viable sources of support for such projects. Not surprisingly, so many of them start like Kutsuplus only to end up like Uber: such are the structural constraints of working with investors who expect exorbitant returns on their investments.

Finding and funding projects that would not have such constraints would not in itself be so hard; what will be hard, especially given the current economic climate, is finding the cash to invest in them.

Taxation seems the only way forward – alas, many governments do not have the courage to ask what is due to them; the compromise between Google and HM Treasury is a case in point.