All London Taxis To Have Contactless Payment Facilities By Next Year.

Early this morning , we heard the news that from next year, every Taxi will have to have a TfL approved Contactless Credit Card payment system, under the terms of the conditions of fitness. Obviously, this will not be available free to the driver and in certain cases, the driver will have to pay a rental fee for a fitted unit. More news as and when it becomes available.

The driver will have to pay the card surcharge which we believe will be set at 3%, with the passenger paying just the metered fare. 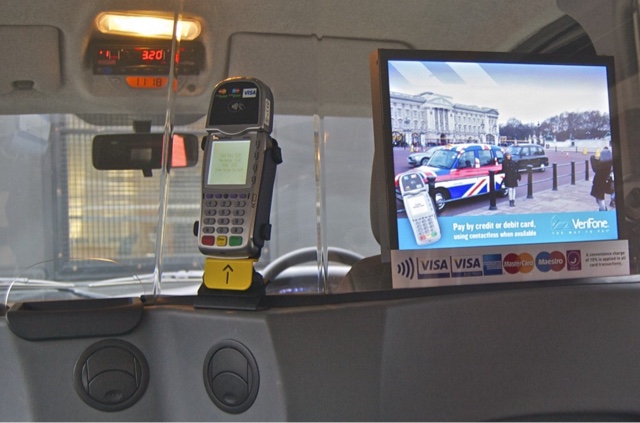 To compensate the driver, there will be a small increase in the metered fare (20p). This means that passengers who pay cash, will be subsidising those wanting credit. (Can’t wait to see the headlines in the papers when that comes in)

But it doesn’t end there. This new measure will not put bums on seats as drivers will still be able to refuse.

Contra to what many people believe, there has never really been a shortage of drivers able to take Card payments…..12,000 drivers on Hailo, 7,000 drivers on Gett, plus thousands of Cab App and iZettle users all with the facility to clear payments from street hails. You also have even more drivers on radio circuits that clear street hailed CCs.

We have recently seen an assault on in-app card payments by a certain business competitor, complaining to Visa about CabApp’s clearance of Visa payments by the driver. It’s about to get very nasty.

In our opinion, the only people who will be laughing all the way to the bank, are the third party fixed system suppliers, who will be renting out their equipment.

If TfL projections are correct, this business will be worth somewhere in the region of £24m a year, all of which is to be taken out of the drivers pocket.

Read the statement from the Mayor made earlier today
>Click Link<

Here’s what the GLA Transport Committee had to say about the new measures:

The Transport Committee welcomes Transport for London’s (TfL) announcement that taxis will have to accept card and contactless payments from next year.

Making the acceptance of card payments more attractive to cabbies was one of the important recommendations made in our ‘Future Proof’ report into the taxi and private hire industries – and it is clearly common sense. (How is paying a rental and paying the card surcharge, making card acceptance more attractive to driver?)

Passengers will no longer have to worry about carrying cash and it is very positive news for drivers.

We heard evidence from New York during our investigation, where the introduction of card payments boosted business (not so! The Yellow Cab industry in New York has been decimated by Uber who have now stepped up its assault on the trade by slashing fares by 20%. The industries medallions which were once worth billions are now virtually worthless and unsaleable) – so this gives licensed taxi drivers a golden opportunity, in a hugely competitive market.

The elimination of customer surcharges for card payments and the reduction in transaction fees paid by drivers should all add up to a better, more efficient service for customers. (The way they have phrased this passage, is as if drivers have been paying transaction fees which are now going to be reduced…again the GLA research seems to be years behind the reality of the situation).